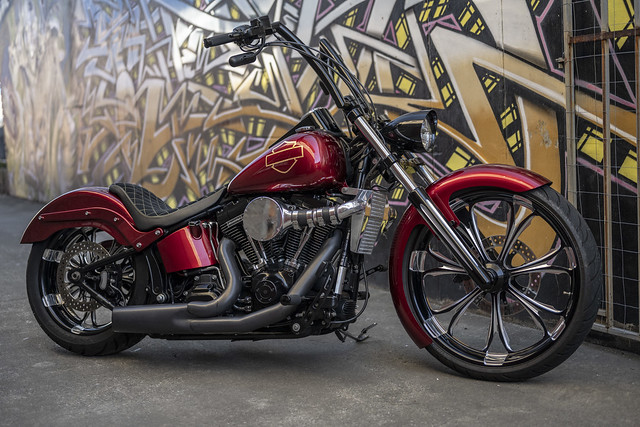 When Brisbane Custom shop Taverner Motorsports dropped us a line to say they had a few builds we might be interested in, I jumped at the chance to find out more about the Supercharged Fat Boy Lo they had sitting on their showroom floor.

After writing up numerous turbocharged builds for HEAVY DUTY, the idea of getting ‘the learn’ on a mechanically boosted Twin Cam was an opportunity too good to pass up.

As most of you would know, a turbo works by the employing engine exhaust gasses to rapidly spin a turbine that increases manifold pressure and rams air into the combustion chamber, whereas a supercharger achieves the same result using mechanical means, typically via a belt and pulleys to turn an air compressor or blower.

I sat down with CEO Joe Taverner in the front office of their Bowen Hills premises asked him to tell me about the bike.

“It started life as a 2010 Fat Boy Lo”, he began, “But it sure doesn’t look like that now. When we first got the bike it had a set of bars on it and the Pro-charger had been installed – and not much else.

It was a friend’s bike and when it came up for sale, we grabbed it. It had actually taken the top off a piston at that point, so we rebuilt the motor and then, with a fresh motor … well, we really started from there.”

“So it already had the supercharger on it?” I asked.

“Yes, but we are an authorised Pro-Charger dealer, so we knew exactly what we were dealing with. We rebuilt the top end and had Freddy at Pro-Cycle tune it and it made 178 -plus horsepower at the back wheel and I … um” he grins, “did a couple of burnouts on it and thought ‘I really like this bike! Let’s give it a facelift.’”

“We started with a pair of Performance Machine Rebel wheels, then we sectioned the rear fender. It’s a stock fender that has been highly modified. We did the weld-in pocket for the RWD Tail light, blacked out the engine cover cases and had the bike painted by Brett Picard at Kool Kustoms.

From there we decided to move away from the standard Fat Boy front end look, so we added some five-degree raked triple trees, a 23” Rebel wheel and a RWD fender that we also changed the radius and dropped it a little bit lower on the tyre. We’re never quite happy with the way they come out of the box, we always like to tune them a little bit and the results speak for themselves. Particularly because it’s up the front and everyone is looking at it. We also added Arlen Ness lower for sliders to tie in with the wheels.

We went with Burleigh Highball handlebars sitting on Burleigh risers and freshened it up with Avon grips and pegs, just to make it look a bit tidier.

From there, Lee Brothers made a custom seat for us and we installed Legend Air Ride suspension. We fitted a quick shifter and a chain drive conversion to deal with the power, and the muffler is a highly modified D&D.”

Which brought us to talk more about the engine.

Joe says, “It’s running a Power Commander Tuner because it integrates well with the Pro-Charger, Freddy does a dual-table map, and we always use the Power Commanders on our Turbo builds as well.”

Which led to the obvious question, “What is it like to ride?”

“It rides beautifully, you can ride it like an old man, you can just cruise around comfortably and then screw it on and hang on. It’s tractable and nice and smooth at low revs, and that comes back your question on why a supercharger rather than a Turbocharger.

It’s about the rideability, really … the turbos, with the way we are making our kits these days, still make good power down low, and don’t have that traditional lag, but they still have a power surge when it really kicks in, whereas the Supercharger gives a smooth delivery all the way through with no lag at all.

And the other advantage is the way the Superchargers look, particularly on the left-hand side with all that billet, it looks super-impressive, as does the intercooler sitting up front.”

I had to agree.

“Are they ever finished?” Joe smiled. “You know, we’re probably going to do a few more things to it, we’re considering changing the logo on the tank, but I don’t know, the bike is up for sale now at $60,000. But if we do keep it, we’ll put it some local shows and maybe do a few runs at the drags to gauge interest. There aren’t too many supercharged Fat Boys out there.”

Which led me to, “Speaking of interest, if I have a Twin Cam and am interested in supercharging it, what would it cost me?”

“It does vary, but by the time it’s fitted and tuned, you’re out the door at around $13,000, ride away – with a two-week turnaround and you’d be looking to achieve anywhere from 160 to 180 horsepower. We have Pro Charger kits available for just about every model of Harley, with a Milwaukee 8 kit under development now.”

At which point we headed out to do a photo shoot and I listened in awe as this wild beast roared into life. It really is a beauty.

The Taverners Motorsports are a family business that started in Bathurst in the 70s and are now located in inner city Bowen Hills, Brisbane.

The family’s love of motorcycles started with Paul Taverner on a BSA Chopper or Norton Commando where he “terrorised the streets of Bathurst” and a few years later went on to open his first bike shop ‘Street Bike.’

Paul’s son Joe was also bitten by the motorcycle bug early and he now has over 20 years’ experience of his own.

He has been on the tools since he was 14, then went on to drag racing and building bikes night and day, picking up the tricks of the trade while working by his father’s side.

Over the last 47 years countless motorcycles have been built, raced, repaired and serviced by the Taverner men and have been part of many trophy winning performances and custom motorcycles along the way.

For more info on supercharging or turbocharging your ride, check out tavernermotorsports.com.au.