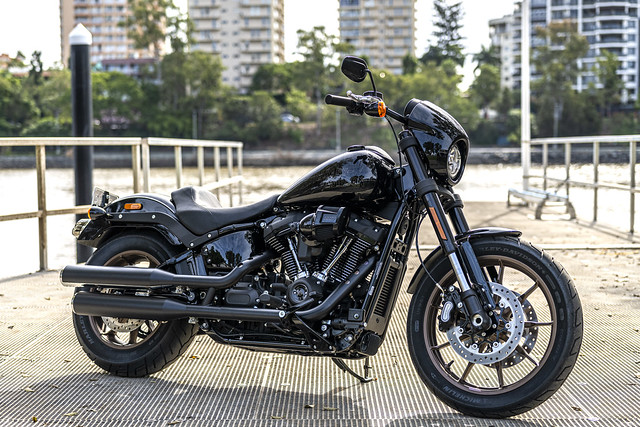 One of the many great quotes attributed to storied American Basketball Coach John Wooden was, “We can have no progress without change.”

The changes Harley-Davidson have incorporated into the latest Softail Low Rider S are not major, but they do represent significant progress.

Not long after I collected the 2022 Softail Low Rider S I started trawling back through my library for points of reference to see just how much had changed.

This is the sixth Low Rider S I’ve spent time with, and I thoroughly enjoyed all of them. (See side bar.) Model-wise, each one has been a better bike than the version that came before it.

Back in 2016, around the editorial desk, we all agreed that the 110 cube Dyna Low Rider S was the best Dyna ever (HEAVY DUTY # 146).  We also thought it was a crying shame that ‘peak’ Dyna also roughly coincided with the platform’s demise.

Its true potential was really brought home with a 117cu.i custom build by Morgan & Wacker that we featured in Issue #147.

Its ergonomics and mid-controls weren’t universally popular, but as a Harley for a twisty road and getting amongst it with the sports riding crowd, it was a peach.

Our lamentations were short lived, because in late 2019 we had a first taste of the 114-cube M8 Softail variant and the whole game changed.

The new platform retained or improved the handling, road manners and some of the style of the Dyna, but removed the harsh vibes and shakes while adding the tractability, compliance and responsiveness of the 4-valve. We even said it had the ‘Soul of a Dyna’ in Issue #167.

We still had a few gripes, but it was the first time that Mick, Paul and I universally agreed that this is a Harley we would buy, and do very little to, apart from ride it … a lot.

But now, Harley have upped their ante again with the latest 117-cube version and it’s an absolute peach.

Our gripes with the 2020 and 2021 Models have been well and truly addressed.

The first issue we had was with the tank mounted instrument cluster.

Harley maintained that this mounting paid homage to earlier Low Riders, but for a performance machine it was incongruous, counter-intuitive or just plain daft to have to lower your eyes so far from the road to check the tachometer which sat underneath the Speedo. Naval gazing was never so dicey. Particularly for a bike that was so enticing to tap out.

For ‘22, sitting atop the handlebars and (almost) nestling behind the sports fairing is a

The fact that it now has a plain console on the tank with a badge inset is apparently more important to H-D that it is to us. But the console does look pretty good and gives the bike a leaner profile.

Owing to the bike’s very capable handling and sporty ergonomics, the next thing we wished for was better cornering clearance.

The suspension is still premium quality with single cartridge 43 mm inverted forks with triple rate springs up front and a free piston, coil-over monoshock with 56 mm stroke and hydraulic preload adjustment on the rear.

Our wish for improved clearance has been achieved with a slightly longer rear shock, that not only gives more suspension travel, but adds a degree of tip-in ability. It might not read like much on paper, but it is quite noticeable on the road.

The mid controls give a knees-up ergonomic for taller riders, and probably not something I’d like for a long touring run, but for pure sports riding the bike remains one outstanding Harley. The mids make getting a knee out and moving weight off-board easy and are in keeping with the bike’s character.

That said, it would be easy to convert it to a bike that would be very happy on the interstate too. The sports screen offers surprisingly good wind protection for the torso and the drag bars sitting on 4” risers are all-day comfortable, so is the solo saddle.

To add a forward controls kit costs around $1150 fitted and cruise control is another $570 (fitted), but with those options it would be good to go a very long way. We all think Cruise should be standard on this bike.

Harley claims the Cam has been specified to maximise performance from the Heavy Breather intake and 2-into-2 shotgun exhaust. That all works on paper too.

One thing that is very noticeable on the road is the capability and refinement of the 117 Cube powerplant.

This is undoubtedly the smoothest and most responsive stock motor I have encountered in any new H-D. Yes, yes, we’ve said that many times before, but it’s a fact. They do keep getting better.

Harley specifically makes a repeated point that this motor is dual counter-balanced to reduce primary vibration at idle.

The absence of vibes on both the Press Bike, in bone stock form, and Gasoline Alley’s accessorised demo unit which we featured last month, were quite remarkable for big Vee twins. Very far removed from paint shaker at the lights and highway buzz of the old Dyna.

I spent the first week of the test cruising the city and freeways with occasional blasts up or down the coast and Mountains in dry conditions.

Around town the bike is narrow and lane splits easily and the clutch and gearbox remained a sure shifting delight in hot stop-start.

Carving up a back road is where the bike really shines and has a huge grin factor. Spooling it up and third gear is reminiscent of a Buell XB on ‘roids.

On the freeway it’s relaxed and solid and but I did really miss cruise control. It’s easy for the speed to creep.

For the second week of testing the late May rain set in and in the wet I got a chance to properly test the ABS. That system gets better with every model too. The big twin 4-piston calipers up front clickety-click it to a comfortable stop.

The Dyna was arguably a better-looking Low Rider S. Its lines were leaner and lower. The ’22 Model is still a great looking machine with it’s black on black finishes and Radiate cast aluminium wheels finished in Matte Dark Bronze. Harley calls it ‘West Coast’ style.

The big heavy breather adds a certain toughness to the aesthetic and the livery and engine finishes work well.

Mick isn’t a huge fan of all black bikes and would probably go for the Gunship Grey paint, whereas I’d be all over the Vivid Black.

As tempting as it is to proclaim, that with the current raft of changes, the Softail Low Rider S is approaching ‘peak’ Harley-Davidson, experience tells us that really is folly.

But it’s most certainly progress.

WOULD I OWN ONE

For sure. Not as my only bike, due to passenger and touring considerations, but it would be the one I would ride the most.

WHAT I WOULD CHANGE

The FX designation stood for ‘Factory Experimental’ and at first, sales wise, it was something of a failed experiment.

Several variations followed with increased success until in 1977 the first Low Rider, the FXS became an instant hit.

It was something of a milestone model with alloy wheels, twin disc brakes and extended forks with a 32° rake.

In 1983 it evolved into the FXRS Low Rider with a new frame, rubber mounted engine and 5-speed transmission.

1991 saw the introduction of the Dyna chassis and two years later the FXDL Dyna Low Rider was released.

Engine capacity and chassis improvements continued on the Dyna platform over the next two decades. In 2010 the FXDL was discontinued.

A revised version was then re-released is 2014 and in 2016 the first FXDLS Dyna Low Rider S hit the market.

It was fitted with a Screamin’ Eagle 110-cube engine and set the tone for the current batch of ‘S’ model designations we see today.

The Dyna platform was retired in 2017 and in 2018 the Softail Low Rider S was released with the new Milwaukee 8 114-cube engine and improved chassis.

2022 sees the engine capacity increased to 117-cube and fitted revised suspension and instruments. 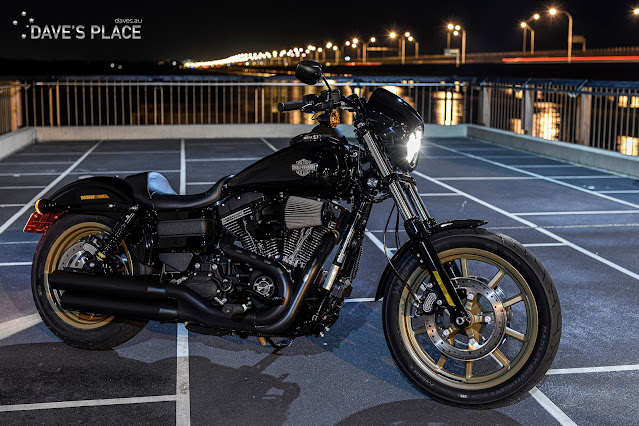 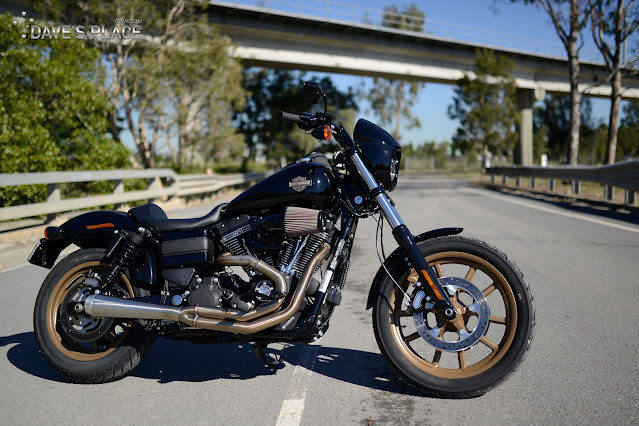 2019. Saw our first run with the Softail version and we loved it. 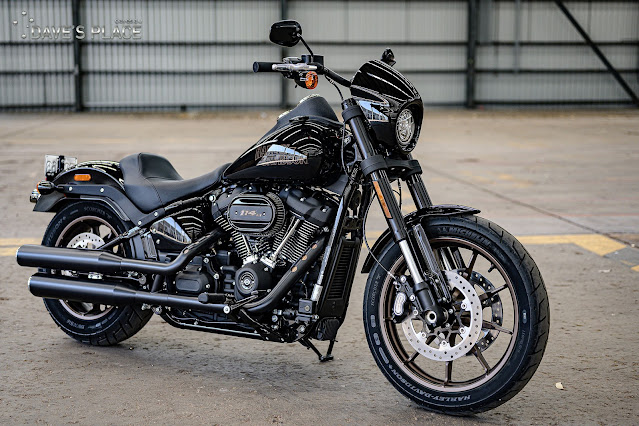 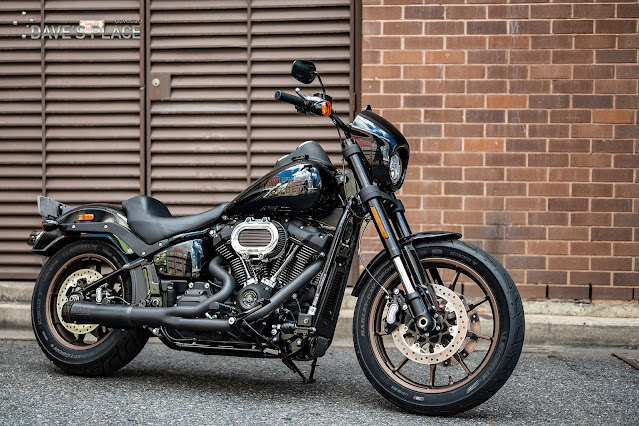 2022. Gasoline Alley gave us a glimpse of the shape of things to come with a modified 117-cube demo. 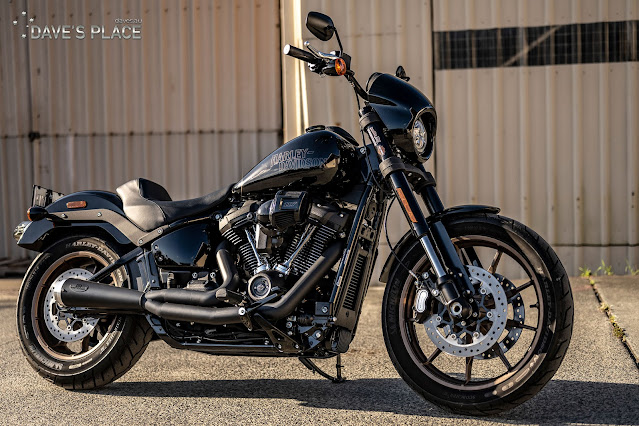 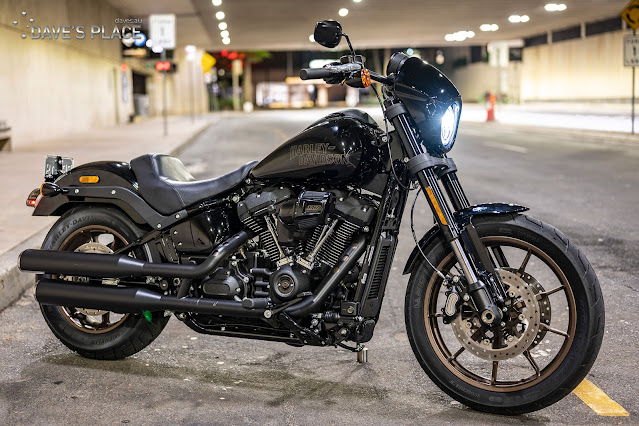