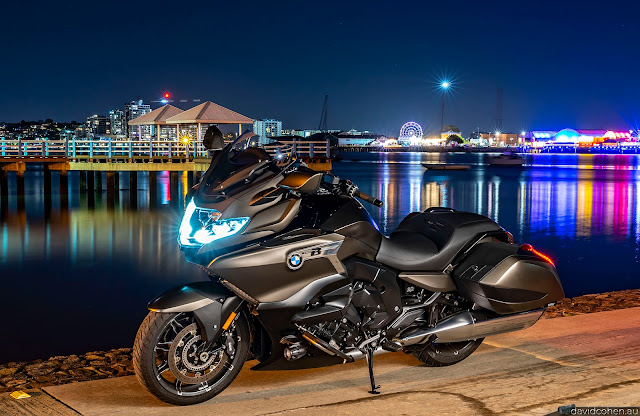 An assortment of slack-jawed yokels and cap-askew ‘yoofs’ gawped in bewilderment as the BMW K 1600 B purred past them along the waterfront.
On-board, I smiled inwardly, knowing that even the baggy jean and skateboard brigade acknowledged the sheer presence of this machine, and I imagined what their expression would be like if I really made it growl.
Like most of the motorcycles with six-cylinder engines that I have ridden, when you do give it a handful, it growls – and this 1600cc gem has just enough exhaust aperture to make it impressive.
After picking the test bike up from Morgan & Wacker BMW in Brisbane I had a quick blast down the M1 before looping back around the Bayside to home and thoroughly enjoyed it.
Switching the bike to ‘Dynamic’ mode is a thing. A very real thing. (Morris, Russell. - 1969.) 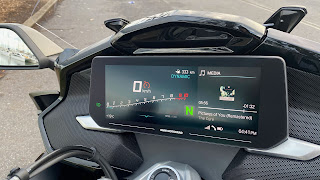 I then spent a few hours drilling down into the technology and coming to grips with the myriad of settings available, particularly for the on-board infotainment and navigation – and have it fully sussed.
It was all very intuitive. It does need the ‘BMW Connect’ app installed on your phone for the nav to work – but that was seamless too.
There is a phone caddy with USB-C charger above the 1920 x 720 HD instrument screen and said screen now displays my playlists and gives navigation guidance with phone and media controls available via the left hand switchgear – all outputted to my in-helmet earphones.
I’ll be vlogging this one hard on my You Tube channel too - once I build some collateral.
Subscribe here:
https://www.youtube.com/bigdavesplace
It’s a meaning thing, a really meaning thing.
Email This BlogThis! Share to Twitter Share to Facebook