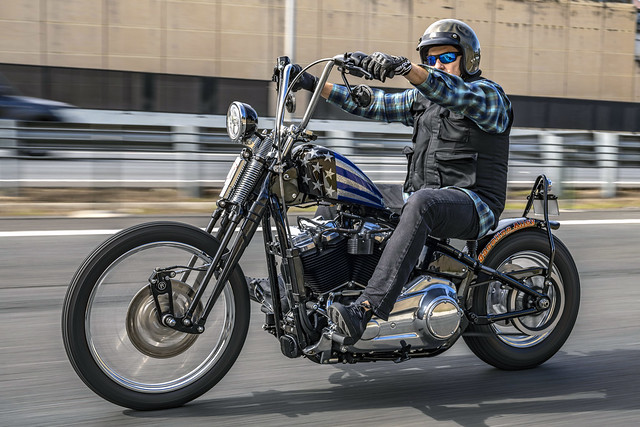 Born to be mild.

When Harley released the latest incarnation of the Softail Standard it was promoted as a “blank canvass for customising”. It’s proving to be just that. 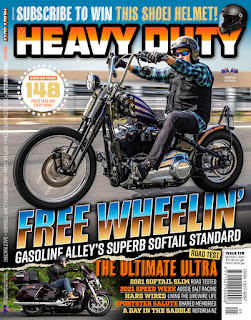 In our HEAVY DUTY example, the goal with Mick’s ‘Project Superglide’ is to modify the bike’s styling and performance to pay homage to one of our all-time favourites, the FXE–80.

Meanwhile, Fergus Bell and the crew from Gasoline Alley H-D have headed even further down the retro path with a bike that recalls the halcyon days of classic 70’s choppers – and it works wonderfully.

I was tyre-kicking about the dealership when ‘Ferg’ said, “Dave, come and have a look at this.” In the workshop was a pile of parts around a stripped-down Milwaukee 8 frame and motor that also began as a ’21 Softail Standard. I looked closely and replied, “Oh, that’s going to be very cool!”

Not too long after we were heading out for a photo shoot. That pile of parts (and a lot of skill) has become a great looking custom motorcycle and judging by the amount of people who stopped to ask us about it while we were shooting it, it’s a real crowd pleaser too.

When we got back to the shop, we sat down to get the full story.

“Rob K, my business partner always says that I ‘build the most non-Harley-Davidson Harley-Davidsons’. That comment was based around my Dyna and Road King builds that had Ohlins suspension, big horsepower and a heap of high-performance modifications – bikes that were good fun on a track day.” He began.

“So, with the release of the Softail Standard, which is a great bike to begin with, we decided (along with our parts specialist Doug Every) to do a blank canvass exercise and build a Chopper with a Springer front end and use a Sportster tank to make it look as old-school as possible.”

“Was this based on any particular bike you had in mind?” I asked.

“There were a couple of bikes I had seen on social media but nothing specific - and we kind-of started the build without telling Rob, but pretty soon it started to generate a bit of buzz around the place and the cat was out of the bag.” He laughs.

“It’s a Meatballs Springer front end, with a Performance Machine front calliper and 21” front wheel, using the standard hub relaced on a bigger rim, and you know, apart from that, technically there hasn’t been a lot of things done to it.

The frame hasn’t been touched, it’s got the standard swing arm, belt drive – it’s all bolt-on. The idea there was that we wanted to see that if somebody came into the shop and said, ‘Build me one of those, how much will it cost?’ Then we would have the figures available - depending on how far they want to go with it.

It has been fitted with Slam-tail rear suspension, so when it’s in the lowered position it does really look like a rigid frame – so much so that, particularly with the number plate we have fitted, people genuinely mistake it for a 1971 model.”

“Were you tempted to fit a chain drive?” I asked.

“No, not at all. I want to ride this bike to Melbourne and do tack days on it … but not with those tyres.” He grins again.

“Clearly it will be slower than my Dyna, but the whole idea is about riding it, having a good time and a laugh.

The motor is totally stock except for a 475 Cam Screamin Eagle Adjustable Pushrods. We use that cam a lot, it’s a great cam and it makes the bike sound a bit lumpier … like a traditional Harley so you get that nice rock at idle.

Initially I was going to go for performance upgrades, however we decided the best way to make it feel faster was to put those old-fashioned Shinko tyres on it.” Again, with a laugh.

“But really, that engine with a 475 is developing around 100 horsepower and with that front brake it’s all you’d want anyway. It hasn’t got a lot of stopping power, but that’s the way of Springer front ends. Let’s just say it has a rear brake bias. But the bike handles fine and the rear brake is good, and after all you are riding a chopper styled motorcycle.

The main thing we did was try and make it look older. We moved all of the oil lines that ran over the top of the rocker boxes, and we put them up through the frame … all the wiring, and everything we could, also went up through the frame, so it has given a very clean and uncluttered look to the whole engine.

Same with the internal wiring in the handlebars, so all we’ve got showing there are the clutch and brake lines. We also fitted cruise control – because I am going to take the bike touring. Admittedly it might not be very fast touring, but I am serious!” More laughter.

“We fitted our Red Thunder 2-into-1 exhaust system after doing a bit of research and finding that quite a lot of the period bikes that I liked did have that type of system. Our first thought was to go with an upturned drag style set up, but the Red Thunders work so well we couldn’t go past them.

But, really it remains a 2021 Softail Standard that pays homage to the classic chopper builds of the past. It’s reliable, goes like a modern bike and the true Chopper enthusiasts will say ‘That’s not a Chopper’ – and that are right.

Others have said, ‘Well you aren’t going to ride that far – look at the seat’, but the seat doesn’t mean a thing – the bike has suspension. In fact, the genuine H-D springer seat is comfortable – so much so that the springs on it have been blanked out - but we retained them for the look.

The handlebars are 12” Burly narrow apes and they also added to the look. We chose them with rideability in mind. The instruments are standard and have been mounted with a ‘Wild One’ relocation kit and two H-D clock mounts and the switchgear is stock. We did fit Oberon adjustable levers, again with rideability in mind and it all worked well with the styling we were after.

The sissy bar was fabricated in-house and is fitted with a Retro Bobber LED taillight and the Kellerman 3-way black indicators fitted to the 6” Flat style rear guard with bobbed tip. The rear wheel, pulley and belt drive are all stock.”

The stunning paintwork was done by Livin’ Loco Garage on the Gold Coast. It’s a House of Kolor metallic flake in Cobalt Blue and Black Candy and it looks great.

What Ferg and his crew have come up with is a modern motorcycle that pays homage to the choppers of yore, but still retains comfort and rideability.

“The only real issue with it is fuel range’, he concedes.

If a modern chopper-style machine is on your wish list, have a talk to the team at Gasoline Alley, they have a working prototype ready to roll.