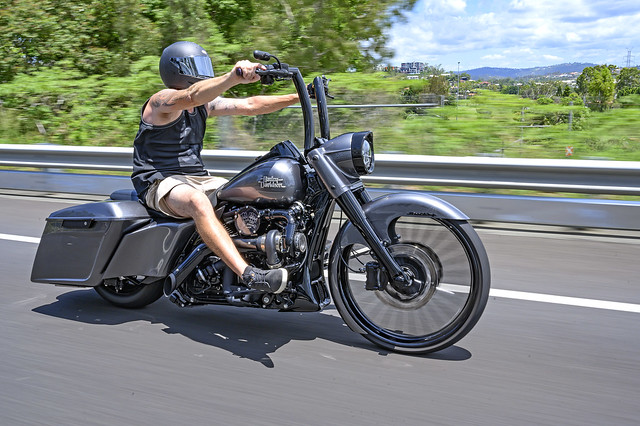 James Bullions’ 2017 Road King Special has evolved into a bike that is part drag racer and part Full-on show bike.

We sat down with James and Karupt Customz Owner/Operator, Jamie Levien at their Nerang workshop.

Jamie took up the story, “It started life as a 2017 Road King and came to Karupt as an already built stage4, bagged front and rear. It had 16” Burleigh highball bars on it with messy cabling, so we ordered a new set of bars and completed the full internal look to keep the cockpit super clean and tidy. From there James decided he wanted to ‘kick it up a gear’.

It already had a 23” front wheel and the decision was made to go to a 26” which meant we changed the whole tree configuration and added a nacelle kit. Then we went to internally wired Burleigh Bars for a nice clean look.

The stage 4 kit was already producing 128hp but James just wanted more so we organised a meeting and went through options of making this thing a ball tearer. The plan was to go with some added boost! James ordered the very first M8 Bagger turbo kit from Burn Brothers performance, matched with a Twistd Industries manifold. We were able to piece together a kit that produced awesome power and reliability.

After blowing the factory clutch basket, we went with a fresh Barnett billet basket with a Barnett scorpion clutch insert with upgraded clutch springs to give us the clamping pressure we needed to hold down the horsepower.

An upgraded slave cylinder was also needed because the factory unit could not keep up with the clutch demands. So we bolted in the new MJK Engineering billet slave package. It’s running just shy of 12psi boost and on the last Dyno run it was putting out 193 Horsepower at the rear wheel and 194 ft. Lbs of torque.

So, as you can imagine with those sorts of matching numbers the bike is an absolute beast.

Backing up with driveline mods we added a MJK engineering chain drive kit that retains the cush drive setup. It’s all bolted into a limited edition full billet swingarm designed especially for the tourer models. Double radial calliper mount with to precision MJK radial callipers were wrapped around a Galfer USA wave rotor.

The front brakes also needed to be modified to the Twin Radial set up with MJK Callipers as well and these were wrapped around two oversized Galfer USA wave rotors.

The rear wheel is still the stock factory unit, but as it’s completely hidden by the bags, we didn’t feel any need to change it. James added the MC Road Runner custom seat with a bit of grip and a nice low-slung line.

Apart from that most of the main science has gone into the custom motor package.

It started when we balanced and welded the crank.

We were the first to machine in a Timken bearing conversion for a Milwaukee 8. It was a full custom made Timken sleeve so we could stop the crank from ‘walking’ and moving inside the crankcase, and to handle the power and load.

From there we had some low compression pistons custom made and they dropped the compression from 11:1 to 10:1, to deal with the turbo boost pressure. Cometic MLS head gaskets were added to help get a good seal. We did use the Screamin’ Eagle Stage 4 M8 Head. It’s already got the bigger valves and enough air flow to get the results we wanted.

It does have upgraded ARP Head Studs, ARP Rocker Studs. We ordered in a specially designed cam around the M8 platform designed to help with turbo applications.

Locking all of this in the crankcase is a Fueling oiling system, cam plate and hi-flow oil pump and upgraded lifters.

There are a lot of people having a crack at Turbocharging bikes in this country. Everyone wants a Turbo ‘Yeah let’s just bolt it on’ they say, but the bike is unreliable. We take the time and effort to make sure the bikes are set up correctly to handle the extra load that boost forces on the internals, not only high performance, but also highly reliable, to ride every day.

To further ensure that reliability we changed out all the standard factory fittings and added EFI Solutions Teflon lines, oil feed, oil dump, breather line and fuel lines - to give it that awesome Race-car theme look.


It has a Turbo-smart blow-off valve and a Turbo Smart Wastegate. They are an Aussie Company so we know it works well. It has a Turbo Street Boost Controller so we can dial up when the boost comes on and control the waste gate.

We’re running a Power Commander PC5 which allows us to do an auxiliary map sensor over the top of the Factory map. It gives us great control of the flows and curves and adjust manifold pressure.

The oil cooler is Factory standard and has been hidden in behind the chin spoiler.

There are so many more nice touches that James has added to the bike. The LED Headlight conversion, the Under-perch Indicators, LED lights In the bags, really is a credit to him and our head mechanic Ben Chase who did a stellar job putting the whole thing together.

James then took up the story, “Yeah, I bought it new in 2017, and basically replace about 85% of the bike. It had the first Stage 4 Kit in the country. Then from there the whole procedure started.

The Burn Brothers Stage III Kit was a key part and Jamie and his crew did a great job getting it all to run as well as it does.

It’s been a long process and I’ve done a number of things more than once. If I had of taken the straight line to where the bike is now it would have been a lot quicker – and cheaper. I fitted a 23” front wheel, but then decided I wanted to go to the 26”. I fitted two different sets of handlebars and heaps more examples of changing up, but ultimately, we’ve come up with a fantastic motorcycle.

So, I asked James, “Where to next, what further plans do you have for the bike?”

His reply surprised me. “I think I’ve come as far as I can with this bike, down two paths, one is it’s a tasteful, great looking show bike, the other is it’s a 195 Horsepower Drag bike with very advanced engineering. But I’m now looking for the next challenge, so this bike is for sale, right now.”

If you want to find out more about buying this bike, or having a similar build or performance package for your machine, get in touch with Karupt Customz or find them on Instagram.