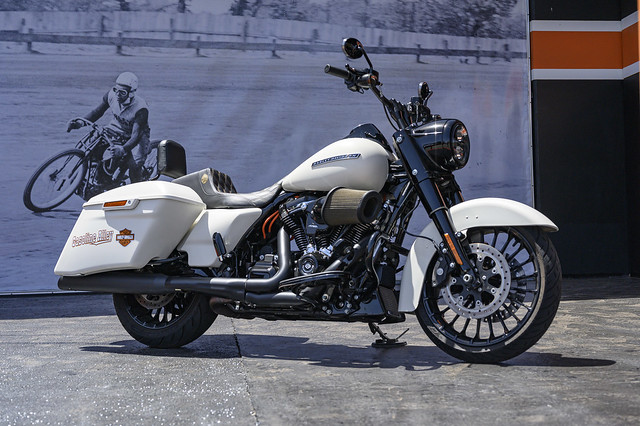 No Drama
This King of the Road is a real all rounder.

Brum said, “Dave get down to Gasoline Alley H-D and check out their Road King Build. I hear it’s pretty special.”

Shortly after I was sitting in an office located above their sprawling workshops and talking with the bike’s owner and designer - and one half of the Partnership that owns the ‘Gas Alley’ establishment, Fergus Bell.

“We put this one together because I had a Dyna Low Rider S that was an absolute beast, but it was a bit ‘too much’ for road riding and it was time to move on from Dynas”, He began. “Particularly when there is so much you can do with the Milwaukee 8.”

A number of options were considered before settling on a 2019 Road King as a platform.

“We had thought about building a new Softail Low Rider S, but as this is my own ride I wanted something I could Tour on.” Fergus continued. “I also wanted something that wouldn’t disgrace itself down the quarter mile, and that I could take to track day and prove that tourers really do handle. So the Road King Special was selected and we set about making my wish list become a reality.”

“The colour choice was quite a topic of conversation as well. ‘Why white?’ was a common question, but we thought, well, we’re building this bike which is a little bit different, so we’ll go for the Denim white and in fact it has been extremely well received. It has become a stand-out machine.”

Fergus then said with a grin, “You know, originally I wasn’t going to chase the big horsepower so much. It was going to be all about the handling and the riding position, but the Milwaukee 8 is such a great engine … well.

First we did work on the riding position. We fitted some Hard Case Performance risers and some nice, wide Renthal motocross style handlebars to suit my height.

Then we looked seriously at the suspension. It’s got Ohlins Piggyback Remote Reservoir rear shocks that were custom built and sprung for my weight. That are about an inch taller than standard, about the same height as an Ultra. In the front we installed Race Tech Gold Valves and Progressive springs tuned for my weight – they were built by Steve from ‘Suspension R Us’, just around the corner from us here in Springwood. I said to him ‘Mate this thing has to cope with me going into Honda corner hard’ and he came up with a solution that works brilliantly.”

“Doing that handling work has really paid off because some our customers have seen the benefits and are getting us to do similar conversions with their bikes. It really does handle remarkably well. Especially considering it’s running the standard wheels and tyres – yep standard Dunlops around Phillip Island it went great.”

Fergus said he, “Recently rode the bike from Brisbane to Bathurst to Melbourne and took as many back roads and out of the way routes as possible. Then the following weekend I did the Track Day at Phillip Island, on the standard tyres, and the bike and the rubber proved to be completely predictable and trustworthy.”

“Once we had it handling, we looked at the engine. We were originally only going to but a cam in it and fit an exhaust – stage Two, but it was turning out so well that we ended up taking it a whole lot further.

At the outset we were never chasing the huge horsepower numbers; rideability was always the premium concern and our main goal, but the ‘mistake’ we made was that we put a S&S 124ci kit into our 107 Cube Breakout Demonstrator and well … the rest is history!” He grinned again. “As soon as I felt the results of that, it had to happen with my Road King too. So we ended up fitting the S&S 128ci Kit and 550 Cam, Screamin’ Eagle cylinder heads, bigger throttle body, bigger injectors, Fuel Moto & Mufflers, Maximus Tuner, Screamin’ Eagle Heavy Breather, and Rinehart mufflers. All that has given us a motor that puts out mid 130’s horsepower and high 140 ft lbs of torque yet still remains very, very rideable. It’s my daily rider and commuter and is very easy.

“The commuter bike from hell!” I interjected.

“That’s the thing! You can literally do everything on this bike now: You can take a pillion passenger on it (we fitted a Lucky Dave)seat on it with a backrest), you can tour on it, we took it out to our ‘Race Your Mates Day’ at Willowbank Dragway and it peeled off some respectable times on the strip – spinning the wheel in fourth gear, and it’s proved quite capable on its last run around that track day It saw over 215kph down the Main straight with no head shakes or dramas at all. It’s a brilliant all-round machine and that really was the whole point behind the build. A bike that could do it all - without drama.”

Fergus then handed me the key fob and said, “See what you think, Dave.”

By the time I got to the end of the Freeway on-ramp, just down the Road from Gas Alley, I was completely in lust. The ergos are perfect for us big guys: the bars and risers put the upper torso in the optimum position for comfort while allowing plenty of leverage for chucking it’s superbly sweet handling hard under brakes into the sweeper on the off-ramp. Legs can stretch out on the ample footboards.

The motor is honey and it sounds superb too. The Rineharts and Fuel Moto produce the best note of all the customs I’ve been aboard lately, and Fergus wasn’t kidding about its tractability or its outright ‘schtonking’ performance - it’s outstanding. Then bumbling back through the motorcycle precinct in Springwood, stopping at the lights and low speed crawling, the motor didn’t complain one or stumble. It just behaves like a normal M8. It really is a remarkable all-round Harley.

If you are looking for a similar custom build that will do it all, get in touch with Gasoline Alley, no Dramas.