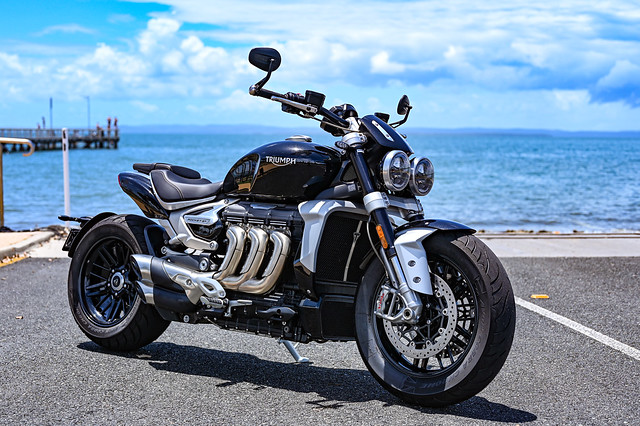 Dave discovers that the new Rocket now really lives up to its name.

Well that was ringing distantly in my ear as I wheeled out of Team Moto Triumph in Brisbane’s south, onto Moss St and into the heart of the Springwood motorcycle precinct. I was on a black 2500cc behemoth: The all-new Rocket III R (or RIIIR for short).

I was mighty keen to see how far the world’s largest capacity ‘production’ motorcycle had come.

I thought I knew the Rocket III well, partly because I have a long history with the venerable Hinckley ‘Battlestar’. (It’s always worth noting that ‘Hinckley’ in the name - lest some ardent BSA enthusiast points out the original Rocket 3 carried the Birmingham Small Arms logo and was manufactured from 1968 at the Meriden plant.)

But by the time I had reached the end of the M1 on-ramp started heading south towards the Gold Coast it started to become very evident that this bike has come a long way.

Early Rocket III models had some shortcomings. The gearbox was comparatively clunky and it ran out of ground clearance well before the bike’s full handling capability was reached. It had a real ‘heavy machinery’ vibe. It was also pretty easy to start dragging the frame on the deck if you really started to push it - and the way it was tuned for huge torque it was very pushable for sure.

It had plenty of good points. The brakes were always good and it was a very comfortable and rewarding cruising machine. As a muscle cruiser it was among the muscliest.

But now, the noisy gearbox and the slap and lash from the shaft drive are all gone. It's been replaced with a smooth and precise drive train with a light, hydraulically actuated Slipper clutch and a notchy, secure sure-shifting gearbox.

Gone are the forward controls, the limited lean angle and dragging hard parts. It now tips in beautifully with mid-mount controls (that offer 15mm of height adjustment) and it has flatter, internally wired handlebars that give an ergonomic much more like a ‘Standard’ riding position with its 773mm saddle height.

The new model is not as cruiser comfortable as the older variants for us big guys, but the way you can ride it like a Sports machine more than adequately compensates.

By the time I got to the Gold Coast Foothills I was giving it 'a bit', hitting 65kph around the 20kph signposted left and right-handers and didn't scrape anything - even when I was feeling for contact with my boots. All I found was beautiful manners and a very big bike with excellent cornering clearance that really does chuck around like a sports machine – albeit a very large one.

Erik Buell once told me, “A lot of people regard the Centre of Mass (COM) as one of the most critical elements in a motorcycle’s handling … but what’s just as important is the height of that centre.” The way he kept as much weight as low as possible in his designs partly accounted for their brilliant handling.

The Rocket III has always benefited from a low COM. It has a car size crank and some very impressive looking heavy engineering in the latest shaft drive, The drive also comprises the single sided swingarm and it all sits very low in the chassis. Subsequently the handling and ease of side-to-side manoeuvres belie the overall mass of the machine.

That said, while the new engine’s capacity has been increased to 2458cc with a hugely oversquare bore and stroke of 110.2mm x 85.9mm and a compression ratio of 10.8:1, the assembly has been trimmed down by 18kg compared to the 2300cc unit.

The crank assembly is also 11kg lighter. Overall the new model is over 40kg lighter (291kg Dry) than the previous model which further aids its chuck-ability. Its new aluminium frame is also 50% lighter than earlier incarnations.

The EFI on the test machine was flawless and the fly by wire allows for four riding modes: rain, road or sport or customise your own settings in rider mode.

The improvements are not just limited to the drive train. It now has top notch Showa Suspension all round and what were previously good brakes have been put on ‘roids with Dual 320mm discs, Brembo 4-piston radial monobloc callipers and cornering ABS.

Add the new Avon Cobra Chrome tryes, that were specially developed for the RIIIR, and it’s a joy on a twisty road. Especially when married to the lazy lope of its massive engine that pumps out 165hp and 221nm of torque in stock form. Plus the new ergos that make it very easy to get weight off-board.

Courtesy of the low COM, it’s as easy to perform low speed U turns as it is solid and planted on the Freeway - or through the long twin-apex sweepers around the back of the Hinze Dam as I was heading back to Nerang. Rock solid – and very rewarding.

Also gone are the looks and style of a machine that I tended to overlook because of how much I liked the copious torque and hammer of the older models. That’s all been replaced with a style that I look at it and go “Oh yes! What a peach!”, although I am looking forward to seeing one with a Tail Tidy in lieu of the unsightly standard rear guard and plate holder assembly.

Even the pleasant growl of the great looking 3-2-1 exhaust is a significant improvement on the 2300cc.

It doesn’t stop there either. The TFT instruments are very pleasing to the eye and the amount of data they display is remarkable. The way the angle of the instrument panel is adjustable made me wonder what nobody has thought of it sooner – it’s brilliant.

In fact, the whole package is. All the nice touches like the very comfortable gel saddle and passenger accommodation, the lights, the switchgear, even the side stand and fold out passenger pegs are excellent, while the underlying technology is leading edge. It has Cruise Control, Hill Hold control, Keyless ignition and steering lock from a stylish fob. There’s an app that can relay route instructions or a wide range of accessories that active a Go Pro camera via Bluetooth to luggage and touring screens.

Triumph even claim that the fuel efficiency of the bike has been improved to 6.82ltrs per 100km – that equates to a possible 260km range. Service intervals are now 16,000km.

The only slight concern I’d have in running one now is that those 240 section rear tyres run out at around $420 each and there’s a hell of a lot of mumbo getting to the contact patch. Then again, you don’t buy a 2.5 litre motorcycle to be frugal.

All in all, the new Rocket III has evolved into a tight, tidy, fast, great looking and accomplished motorcycle. A complete rework of everything I thought I knew about them.

As far as this old stager is concerned, it’s a bike that has come a VERY, VERY long way. All the way to … I really WANT one.

If you want to go a little more upmarket with a more touring oriented machine then the GT is great vale for only $1000 more - $30,990. For that you get a Fly Screen, an adjustable Pillion Backrest, Contrast machined wheels, more footrest adjustments, different handlebars and heated grips.

As part of the range of Triumph Factory Custom Motorcycles the TFC features everything from the GT model but with a raft of luxury inclusions, premium paint and carbon fibre finishes. These limited editions were available for $38,990 but have since sold out – further production may happen sometime in the future. 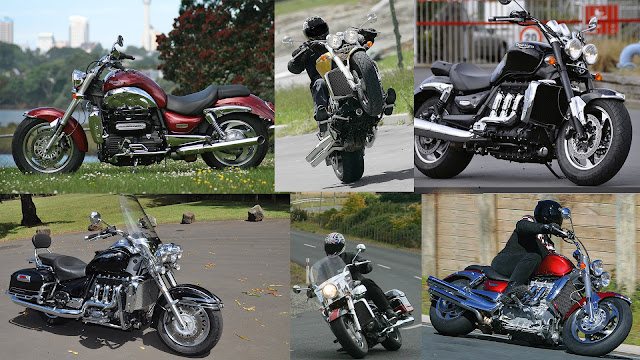 Before testing the new Rocket III I was as familiar with the earlier models as any non-owner could be.

At the time of the original release in 2004 I was the ‘token Aussie’ working in the New Zealand Motorcycle Press and was also serving as a roustabout for the local importer, Triumph New Zealand. I even helped un-crate the first pair to arrive in the Shakey Isles. I was charged with was shaking down and running-in those two prior to them being released to the general Press Corps for review and I also got to write up the tests for the NZ Mags.

In the ensuing years, I rode and tested just about every model, variant and colour way of the 2300cc monster. I even had one as a long-term test bike when blogging was still a pre-Facebook thing.

I counted myself quite an aficionado. I liked the bike. A lot. For a tall heavyweight like me it was a great fit and it had serious mumbo.

2004: The first big Triple. It was huge, chrome and fitted like a glove.

2007: The ‘Classic Tourer’ added a screen, leather bags, luggage and a passenger back rest as standard. It was a great bike except for one major shortcoming. As part of its redesign the fuel pump was relocated resulting in a decrease in fuel tank capacity somewhat compromised its ability as a Touring bike.

2009: The Rocket III Touring model was released tuned for more torque and better economy it had hard bags – and a lot more Harley style bling available from the accessory catalogue.

2010: Triumph went back to the model’s roots with the ‘Roadster’ but added new mid mount controls, exhaust and blacked out finishes.

2014: Rocket X was released as a 10th Anniversary special Paint and finishes.

2020: Rocket III R – completely re-writes history and re-invents the machine from the ground up.