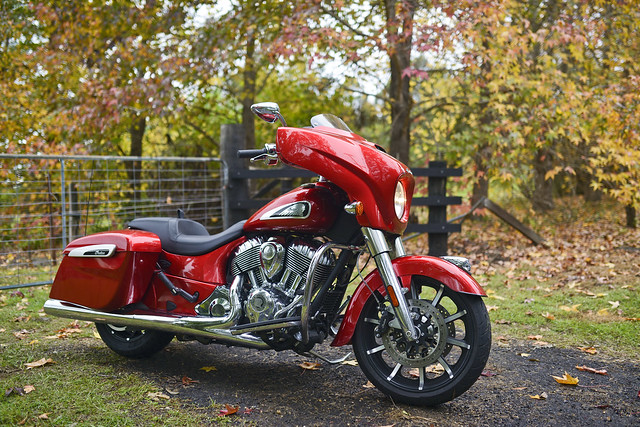 The Indian Chieftain’s 2019 incarnation is more of an evolution than a revolution in the model’s timeline, but the upgrades are still noteworthy, and they add even more appeal to a bike that all of us at Heavy Duty have always rated highly.

They take the improvements made over the previous model years – like the inclusion of the outstanding dash-mounted infotainment system and 19” front wheel - and marry them with improved aesthetics, bodywork, comfort, rear cylinder shutoff and the ability to select three different ride modes – on the fly.

I had a chance to spend saddle time on both an ’18 and a ’19 Chieftain Limited model over the course of the Indian Motorcycle Rides Group’s (IMRG) weekend rally on the Gold Coast.

It was a unique opportunity to hop between both models in quick succession and directly compare them.

The first and most visually obvious change is the fairing’s style and shape, although from the riders perch the view is very similar on both models.

The sound system is very far removed from the earliest incarnations of the Chieftain and is now loud, clear and it really (really!) pumps. Bluetooth phone connection was simple and there is a handy compartment in the top of the dash to stow your device – complete with power source. The whole system is very easy to use and quite intuitive.

Indian claim that the 7-inch display is the largest available on a motorcycle and that the bright, high-resolution screen is positioned close to you, making it easy to read and reach. I found that it works really well with gloves on or off. I used the Navigation System several times to get back to meeting points after I took off from the group ride (to do a few photo shoots) and I really appreciated its capability and clarity. Zooming in and out on the map display is as easy as a two-digit pinch. Changing screens and functions is as simple as pushing a large, well labelled button below the screen. Quite excellent.

The one significant difference from previous models is that three Ride Modes can now be selected from the touch screen. There are options for ‘Standard’, “Sport’ and ‘Touring’ - depending on riding style. I kept it mainly in Sport mode, well, because … ‘Sport!’ In retrospect I should have selected one of the other modes as the back wheel was lighting up in 3rd gear due to the handful I was giving it on the wet and slippery climb up the Burringbar range, but then … ‘Sport’!

The power-adjustable windscreen still emerges from the top of the fairing and its height can be dialled up or down with a rocker switch on the right-hand switch block. The standard screen is now shorter than on earlier models and taller riders will need to upgrade from the accessory catalogue to get full effect from the raised position.

Did someone say ‘Batwing’?

It’s from the front quarter that the difference in bodywork is very apparent. Gone is the ‘Freight-train’ look and driving lights that we’ve been used to. In their place is a more effective and streamlined single headlight fairing.

One of my minor gripes with the older Chieftains was that in Freeway cross winds and in close proximity to big trucks the old-style fairing picked up a little bit of a shimmy in the wash of turbulence. It wasn’t bad – but it was there. I rode close to some big rigs on the ’19 along the M1 heading back to Currumbin and it was all rock-solid. Regardless of the conditions. It has a classic American look that sits well with the Contrast cut wheels and slimmer fender profile that were introduced on the ’18 model

Both taller and shorter riders will benefit from the new shape and design of the saddle. It’s narrower and feels like the bolster that separates rider from passenger is situated further back. It will be easier for shorter inseams to find the ground and longer ones will feel like they sit a little further back. I found it to be very comfortable over the several hours I was aboard and coupled with the large footboards I had plenty of stretch-out legroom. The whole setup gives a ‘sit-at-the-dinner-table’ ergonomic that should be good for much longer days on the road too.

The new-look panniers also appear to be more aerodynamic and their aperture seems wider. My camera bag slid in and out of the new model’s much easier than the old’s and they retain the central locking feature that I really appreciate when carrying expensive kit on events.

The chrome badges and styling are complimentary to the new look livery and tank adornments. The overall presentation has become more modern and tougher looking – without betraying the Indian’s traditional style.

We did hit some traffic exiting the Glitter strip during the first part of the group ride but I didn’t feel the rear cylinder shut-off coming into play on what was a reasonably mild day for Coolangatta. No doubt in a Friday afternoon M1 snarl it will be a welcome addition when the back pot shuts off to keep things cooler. Indian say that when you do hit the throttle it seamlessly reactivates for full power.

Power is something the big 111 Cube Thunderstroke supplies very nicely. The new model seemed slightly more responsive that the ’18, but that could just be a nuance of the individual machines. What they both have is smooth, strong, torquey goodness slung in a chassis that is a real joy to chuck about.

There are a couple of places coming off the Border Ranges with long arcs of downhill corner sweetness. Because the Chieftain is now such a well-balanced, neutral and steady bike, just letting it ‘fall’ into the corners with minimal input is an extremely satisfying and rewarding sensation. Then when you do want to ‘man-handle’ it, it’s both nimble and surprisingly light to the touch.

The test bike was fitted with Stage 1 pipes and it was also quite glorious to listen to. With the newer style air cleaner fitted it also breathed quite well right up to max power. Install Indian’s stage two or three hardware and it would be absolutely awesome!

The 2019 Indian Chieftain Limited has evolved into an exceptionally good – daresay great motorcycle. At $38,995 ride away you would expect it to be. But now the paint, fit and finish are all first class. The performance, handling, creature comforts, luxury and high-tech are seamlessly integrated into what would be a very desirable addition to just-about anyone’s garage.