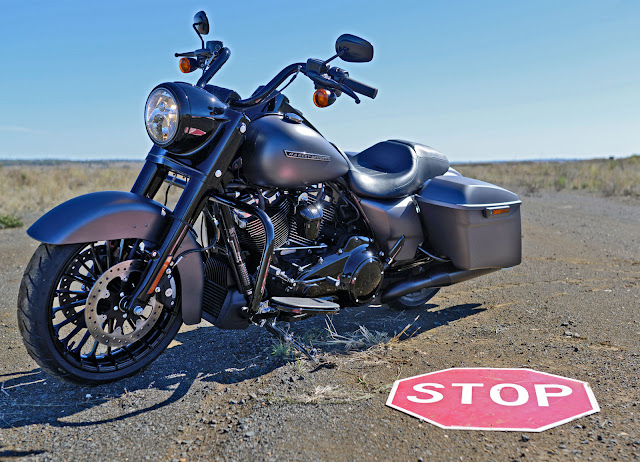 Brum rang and said, “I’d like you to head up to Darling Downs Harley-Davidson in Toowoomba and check out their Stage Five Road King Special.”
“Stage FIVE?” I responded incredulously.
“Yeah, five - go check it out.”
An early-ish start on Saturday saw me in Queensland’s Garden City and hunkered down in a back office of the Taylor Street Dealership by mid morning.

Operations manager/technician Rod Smith and the build technician Tom Miller were sitting on the other side of the desk and I opened with a cunning gambit, “So, tell me about your Milwaukee 8 Road King Special?”

“It’s now a 117 cubic inch with a Stage Four kit, including the CNC heads and valve springs, 64mm throttle body, High Flow Injectors, 4.075 barrels, pistons, Clutch Springs and Plates. But we don’t leave the kit standard, we check and remachine anything that needs it.” Rod began.

“It’s got the new 515 Cams in it - which are the same as the 114 cube you have ridden previously, but the big difference is that we then pulled the motor out and stroked it - with a four and a half inch stroker crank. We also added a 2” Harley-Davidson mandrill bend exhaust system with H-D matching mufflers.” 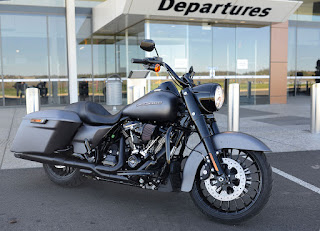 “So it’s all genuine Harley”, I interrupted

“Yep it’s all genuine – we deliberately made everything on the bike all-genuine Harley, just to prove the point that Harleys Screamin Eagle products put together properly – can make the power. It will do the business. Then of course we added a Harley Pro Super Tuner.”

Rod then quoted the numbers, “It’s running out 127 rear wheel horsepower and 123ft-lbs of torque – and as Brum says we don’t inflate our dyno numbers. They are accurate if not conservative. Harley-Davidson Australia even called us and said ‘Are you sure?’ But we don’t dumb down our figures or do flash readings. Importantly we can reproduce them.”

He then threw down the gauntlet. “And I’ll tell you what – I’ll have a ‘five-second’ bet with you. If you can hold it flat for five seconds anywhere – and I mean anywhere – I’ll give you a medal. It gets to warp speed very quickly. It’s a bonafide licence loser.”

Then he gave me some more particulars, “As per usual we did our own custom MAP based on a Harley base map. We do our own ignition, fuel, volumetric efficiency and our own AFR – but our main goal is to make the bike rideable as well as powerful. That’s why we spend so long on the dyno. It’s easy to make top end power – you just keep adjusting fuel, ignition and targets to chase a figure, but to make it have super-smooth power and grunty torque curve, along with maximum top end power, well, that’s the achievement we’re proud of.  It’s silky smooth, it pulls right off idle and you can ride it like a normal bike. It doesn’t fart pop or backfire and most of that is down to the attention to detail. What we wanted and have achieved is tractability. And to do it the thing we had to master first was the new engine management electronics in the Milwaukee 8. It’s not like a normal Harley to tune. The Milwaukee 8 is just not like any other Harley.”

“So what about running gear” I asked

“The Clutch is upgraded as part of the stage four 114 kit, while the gearbox and drive belt are ‘up for it’ in standard form – their capability way exceeds the traction available from the rear tyre. It will light up the rear wheel really easily. But for all that it still idles like a standard bike, with added rumble. 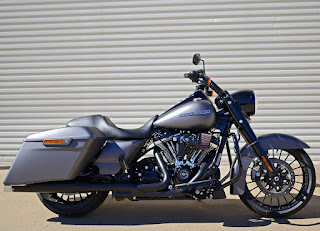 We think it’s similar in some ways to an electric motor – as in anywhere the throttle is – the torque is there too - in a completely linear delivery.

The power still comes on pretty hard at three grand and as you leave here it might well wheel spin as you roll it on in second. Or it will wheelie without much encouragement – we had to change the muffler caps because the originals were ground off from it being up on the back wheel. But for all that it’s a tractable, rideable, touring engine, it’s a beautiful motor.”

“The other good thing is that the motor is not stressed – there is only 65lbs of seat pressure on the valves(x2), which is not hugely stressed when you consider that to make that sort of power out of a twin cam 117 cube you would expect somewhere between 180 to 220lbs of seat pressure, depending on what cam you are running. What all that means is that because the valves are so light it’s an ‘un-strained’ engine that will give a long service life.

We concentrate a lot on getting rid of parasitic loss and friction loss in the engine. And therein lies the secret to optimum performance. Half a horsepower here, half there and add them all up and it’s why we managed to get 127 at the rear wheel. AND we think there is more in it. We’ve also designed some new barrels and will be testing a 143 cube version (2350cc) of a Milwaukee 8 in the near future.”

“You will call me when it’s done?” I pleaded.

But for now Darling Downs H-D have their Stage Five kits in stock and can turn the build around in a few days from the date your bike is booked in for the treatment.

“The cost of the upgrade is $6,944 and that includes the stroker crank, everything finished, tuned – done. The other advantage is the customer’s bike doesn’t need to get on the dyno because we’ve already spent 6 hours on the Road King getting the tune right and that will translate to any future upgrades we do. And because of the self-adjustability/flexibility of the Harley Pro Super tuner.”

To break it down the Stage 4 kit in black granite is $3,838.
The Kit includes CNC ported heads with upgraded springs, SE515 camshaft, 64mm throttle body with hi flow injectors,11-1 pistons and cylinders 4.075, lifters ,clutch upgrade and gaskets. The Stage 5 stroker crankshaft with 4.5 " stroke is $1256. Machining is $450. Labour to fit stage 4 kit, crank and tune is $1400. Total cost  is $6944 for up grade from 107cu to 117cu stage 5, but that price assumes that mandatory stage 1 pipes tuner and air upgrade has already been done and that can vary the hp/torque outcome depending on what’s fitted.

The Road King S as tested has a Screamin’ Eagle high flow mandrel bent system worth $2069, a SE heavy breather at $591 and Super Tuner worth $680 for a total cost of $3,340
A set of street cannons, end caps and stage 1 air upgrade can be had for around $1800  and will still perform quite well and have a total all up cost of $8744. We think that’s great value.

Rod added “Of course if you already have a stage 1 exhaust fitted then the Mandril bend system isn’t compulsory, but the upgraded system did add an extra three horsepower so we think it’s worth it. “

He then handed me the keys and I headed west from the shop and out onto the Darling Downs flatlands. The bike was everything Rod told me to expect. The throttle response was very crisp without being like the ‘hair trigger’ of some of the wilder 125 plus horsepower bikes I’ve ridden. It’s STRONG, powerful, and easily chugged along at 60kph in top gear. BUT when it is wicked up for overtaking or a touch of ‘sports’ riding … by Jiminy! It certainly has some wicked hurry up.

Rod won the five-second bet. Comfortably. It would need tapping out on a drag strip before I would take that sort of risk with my licence. It’s ‘that’ fast.

Slung in the fabulous looking Road King Special chassis, equipped with all the superlatives that go with M8: handling, brakes and comfort, I quite happily told the boys that congratulations were indeed well in order.

I’ve tested a lot of new Harleys and dealer builds over the last 16 years. I think this is now the high-water mark.