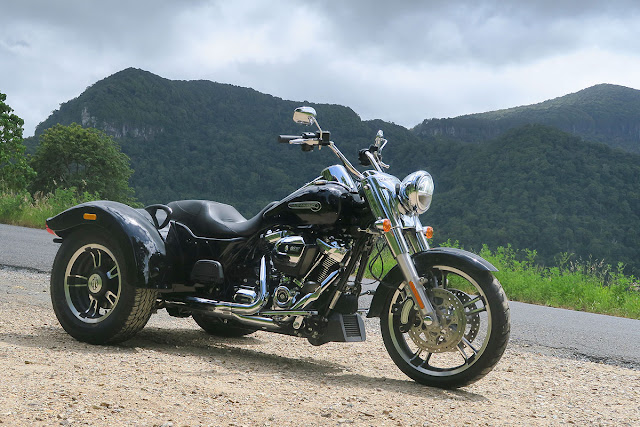 It takes me a few days to stop riding a motorcycle and get the ‘just-sit-there-and-pull-the-handlebars’ mojo needed on a Trike.  That’s when it all finally clicks and I stop fighting the vehicle and start to utilise the G-forces that the non-leaning machine generates. Then they help to swing on the bars even harder and corner with even more confidence.

By the time we got half way up the hill from the Gold Coast to Advancetown I was right back in the zone that I last had when I tested several Tri-Glides during the 10 years I lived in NZ - and worked in the shaky Isle’s bike press.

The big thing is that unless you are already in ‘Trike Mode’ - don’t judge the new ones on a short test ride. They take a while to ‘get’.

As most of you would know, the M8 equipped Tri-Glide and the new Freewheeler have finally been approved for sale in Aus - and we’ve got HD-A’s press unit that only had 24km on the clock when I picked it up on Friday.

I’ve already spent a couple of days and nights wrangling it around Brisbane but today I set off reasonably early (for a Sunday) and headed 40 minutes down the M1 to hook up with Rowey, Lursie and Roberto at Coomera.

After salutations we headed further south down the freeway and Sutho and Spook joined up at Merrimac.

From there we headed west to the Hinterland hills.

It was a great way to test and measure the performance of the Freewheeler.

Yeah yeah, like everyone always says: “Trikes are the worst of a bike – no protection in bad weather etc etc etc, and the worst of a car – bad in traffic, no lane splitting etc etc etc” - and they aren’t wrong.

BUT after almost 500km in the last few days, I reckon the mitigating fact remains that the Freewheeler is, in the conditions like we enjoyed today, serious FUN. No, not motorcycle fun, different fun, but big time fun all the same.

Around the long sweepers to the west of the Hinze Dam Roberto was setting a fine pace and I settled in right behind him - and had an absolute ball. The Trike negotiated the long sweepers in excess of the advisory sign speeds as easily as his well-sorted Softail.

Through the beautiful Numibah valley Spook cleared out on his equally well-sorted Breakout but the Freewheeler had no trouble keeping up with the rest of the pack through the twisty hill country – until I stopped to take photos, that is.

The rough and rutted roads between Numinbah and Murwillumbah still bear the scars of last year’s flooding and required a little more ‘circumspection’. Three contact points on the rutted tarmac tended to make it buck from side to side a bit, but it was all manageable, just not quite as comfortable as the Baggers on the really rough going.

After regrouping by the Tweed river and heading south-east through the long sweepers to Burringbah was a complete blast on the trike. I mean really good fun. G-forced to the max.

After a pie stop at Billinudgel we wheeled North and I did another 100km up the M1 Freeway back to base. Cruise control engaged, solid as a rock-type Freeway.

We’ll be putting together a full test, some ideas as to who the Freewheeler will suit - and who it won’t, and more, in the full test coming up in Issue 157.