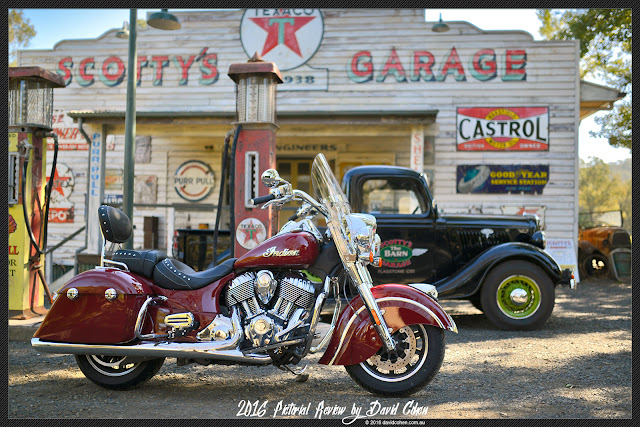 Whilst it may have been a bad year geopolitically and we mourned the loss of many luminary musicians and artists – it’s been something of a marquee year in the sector of the bike industry I cover.

Harley have made the most significant advance in the time I’ve been testing their bikes, Indian motorcycles continued to make a very good product better and Victory released what many believe to be their best machine yet.

So with thanks to my Publishers, Brum and Viv, Harley-Davidson Australia and Indian-Victory for access to their press fleets, and to my customers in the bike industry, here’s a look back at ‘16 from my side of the camera. 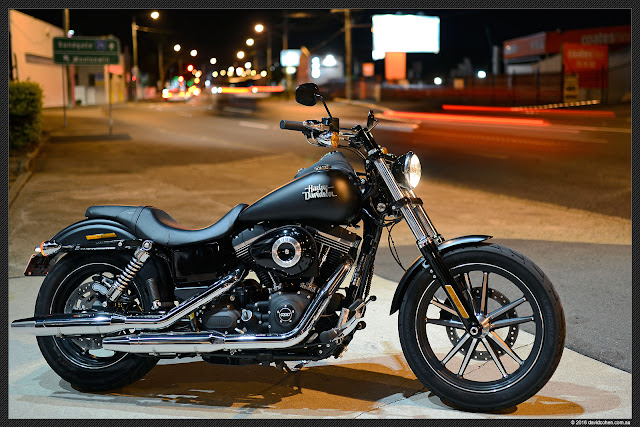 Street Bob SE.
'15 ended and 2016 began with a beautiful Street Bob Special edition in my garage. It was the first Dyna I’d tested for quite a while and it served as a timely reminder as to why the platform is one of my favourites. The bike was surprisingly comfortable and very, very cool. A classy, easy going machine. 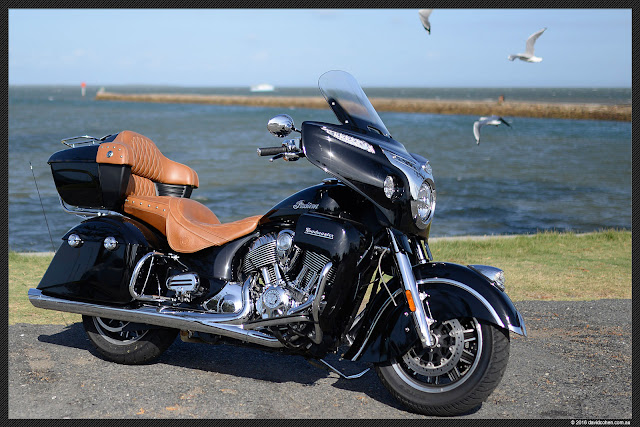 Indian Roadmaster.
The guys at Indian Brisbane made their demo Roadmaster available for covering some rides and events - and I abused the privilege. I couldn’t keep off the thing. It’s from the very top shelf of Cruiser-tourers and I’m really looking forward to seeing what they have done with the infotainment system on the ’17 model. The dash and stereo were the only things that I thought weren’t in keeping with the highest standard of the rest of the ‘16 model. 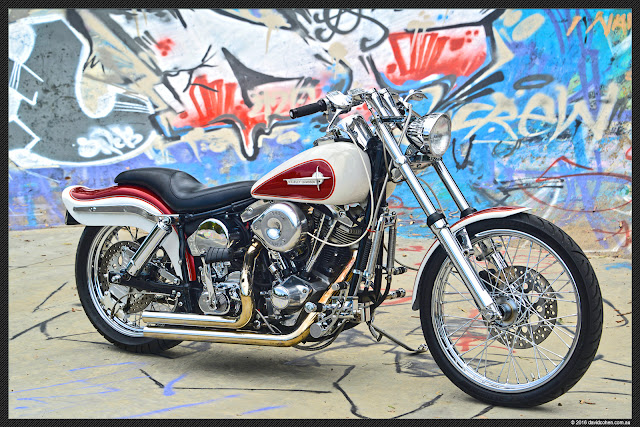 Shaun’s Wide Glide
This old beauty was a feature and interview for Heavy Duty. 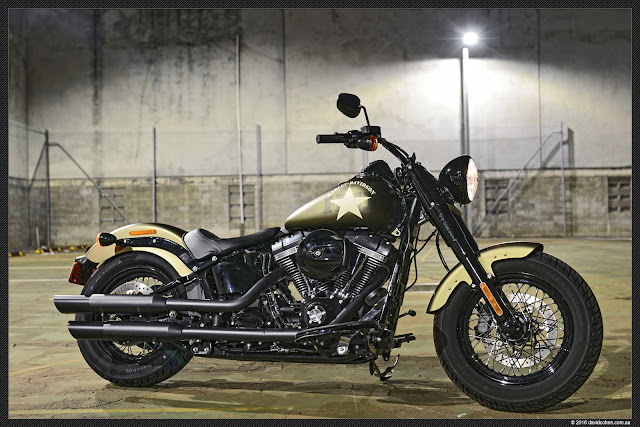 Softail Slim S.
This was the first of the 110B engines I tested and at the time I called it the best stock Harley engine I’d ridden. And at the time it was. (The claim did come back to haunt me later though). But I really connected with this bike. The fat front end makes it the ‘Fat Bob’ of Softails – IE the best handling. Coupled with its real world 150-section rear it makes it a tidy unit on the road – till the footboards start scraping at least. And while the saddle is only as comfortable as it looks I really enjoyed its faux military one-up presentation. 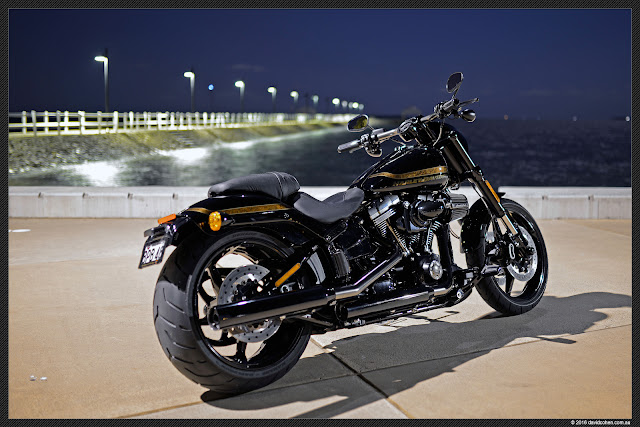 CVO Pro Street Breakout.
Or the ‘best engine’ claim bites me for the first time. I’d ridden a few CVO bikes on short runs previously, but this was the first Custom Vehicle Operations bike that I had for a longer term test and I found it was very easy to like all the extra luxuries that the upmarket offering brings. I found myself looking deep into the lustre of the paint on more than one occasion. Fitted with the Screamin’ Eagle heavy breather to the same 110B counterbalanced engine as the Slim - it had noticeably longer legs. The USD forks and premium suspenders compensate somewhat for the 240 section rear. The wide arse still needed a lot more effort to get around corners that the Slim. But a thing of beauty nonetheless. 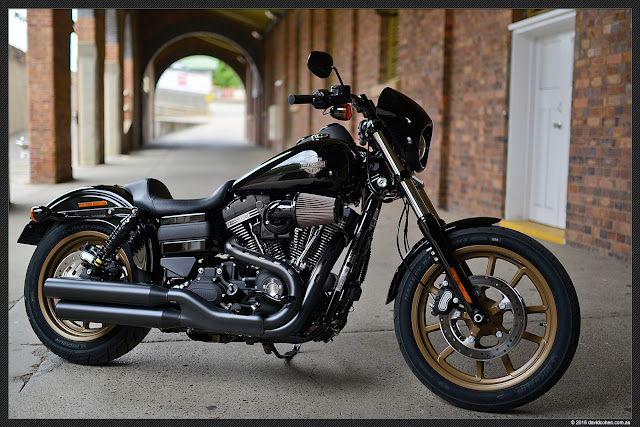 Harley Dyna Low Rider S
Or the ‘Best engine’ claim bites me for the second time. The rubber-mounted version of the 110 motor pulled harder and with more immediacy than the counterbalanced units. Slung in the Dyna frame, fitted with upgraded suspension and finished in deep black and gold - I admit I was quite besotted by the Low Rider. It isn’t my bike of the year, but it was close to my favourite motorcycle of 2016. An absolute peach. 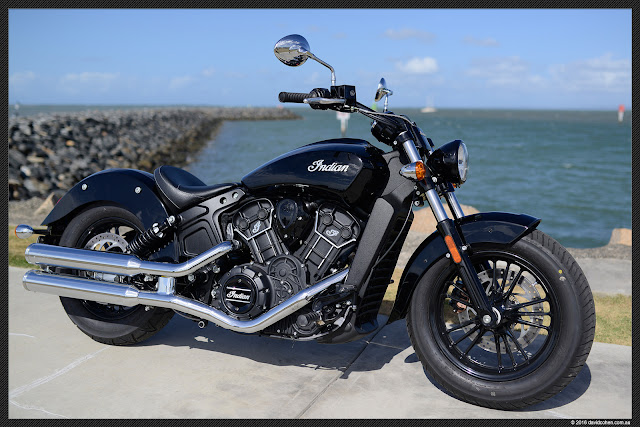 Indian Scout Sixty.
The ‘entry level’ Indian runs out 78 ponies and a heap of big grins. The engine is responsive, lively and very smooth. It’s also slung in one of the best fun urban riding packages I’ve been on since I sold my Buell. It has an engine, clutch, gearbox, exhaust note and throttle response that beckoned “abuse me”. The brakes and chassis accommodate the abuse handily. It’s one of those bikes you get on and just instinctively want to wring the throttle. 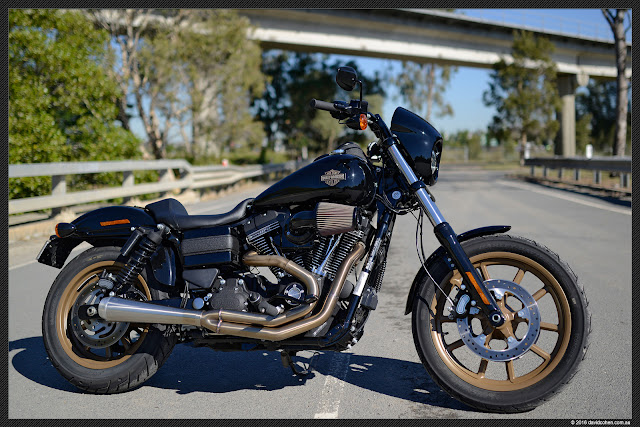 Morgan & Wacker Low Rider S 117cube.
The peak output from the 117 Cube upgrade is 122 rear wheel horsepower at 5750 rpm and it develops 127ft lbs of torque between three and four thousand RPM. Paul Lewis at M&W threw me the security fob and said, “Enjoy this, Dave” so I spent a couple of glorious hours hammering it on the various Brisbane Freeway on-ramps, around the airport drive, cross-town tunnels and a loop along Sandgate Road back to the shop – and returned absolutely beaming. The 117 kit is how to make a great bike superb. 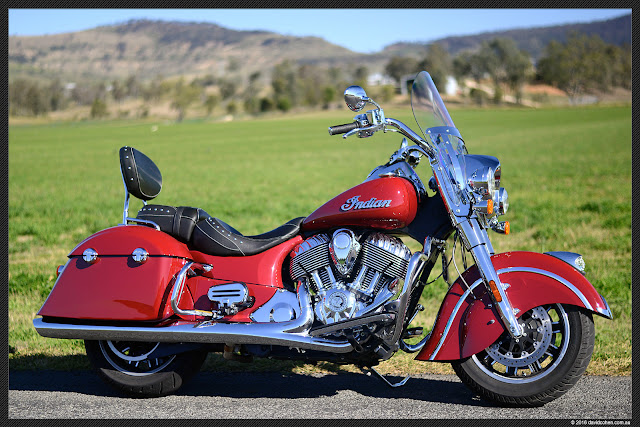 Indian Springfield.
The Springfield was pretty much a lust affair for me from the moment I first hopped on it. Over the course of the test I put in some day rides and country runs that were simply outstanding.
It also worked brilliantly as a city and boulevard cruiser. Relaxed, comfortable, unique, and I just felt good about myself every time I rode it.
The handling is only one aspect where this model sees improvements. It was the most comfortable, felt the most refined and had the sweetest gearbox of any of the numerous 111 cube Thunderstrokes I’ve tested so far.
It’s feature laden, with cruise, central locking, self-cancelling indicators, security fob, multi function trip computer and a host of other high tech hidden beneath its heritage styling. 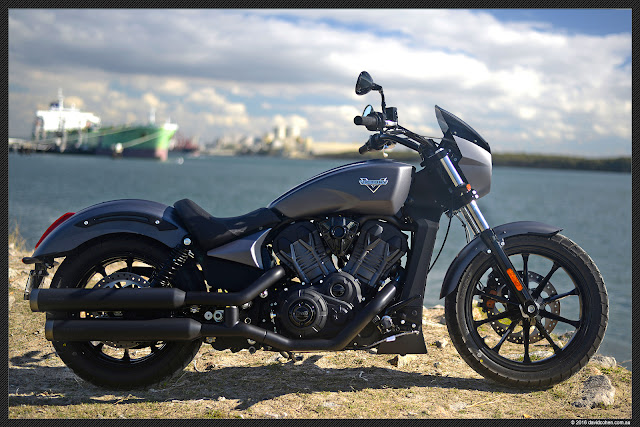 Victory Octane
The real joy of this machine is the power plant. It’s a beauty. It really does require a deal of self-control because giving the liquid cooled 1200cc, 60 degree V-Twin a handful is pure delight. It has 4-valve heads with twin overhead camshafts and is “geared for acceleration.” And accelerate it sure does. At 240kg dry and 103hp it isn’t modern sportbike kind-of fast, but it does have more than ample hurry-up. The way the bike is geared also makes for quite remarkable top gear acceleration and roll on.
With the stage one exhaust system fitted it makes for a very nice note while doing so too.
What made pinning it even more enjoyable is one of the sweetest gearboxes I’ve used. Sure shifting, confidence inspiring, hot knife through butter, both up and down shifting. Rowing it through the cogs is most satisfying. Not hard to see why it’s been labelled best Vic yet. 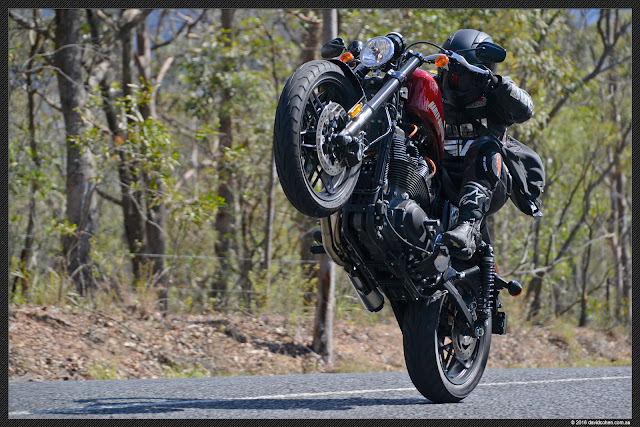 Morgan & Wacker Stage 4 Roadster
Morgan & Wacker Dealer Principal Paul Lewis gave me another call, as he does when his team have built something a bit special.
“We fitted an ‘out of the box’ stage four Screamin’ Eagle upgrade kit, ran our own choice of Heavy Breather manifold, a Two Brothers racing pipe and the result really is sensational. At full noise it sounds a bit like a well-worked V-rod and it goes like … well, you’ll soon find out.”
I did. It does. 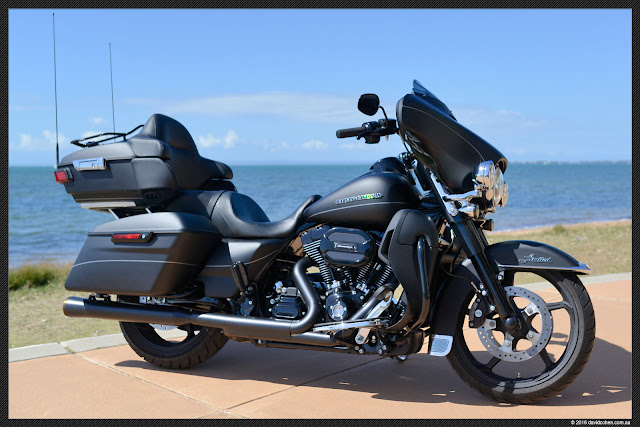 Harley Ultra Classic Low.
Black is black. I enjoyed the looks and luxury, but unfortunately I just didn’t fit well enough on the low version of the Ultra to give at more than a ‘short’ run. Lovely thing though - if you are who the bike has been customised for. 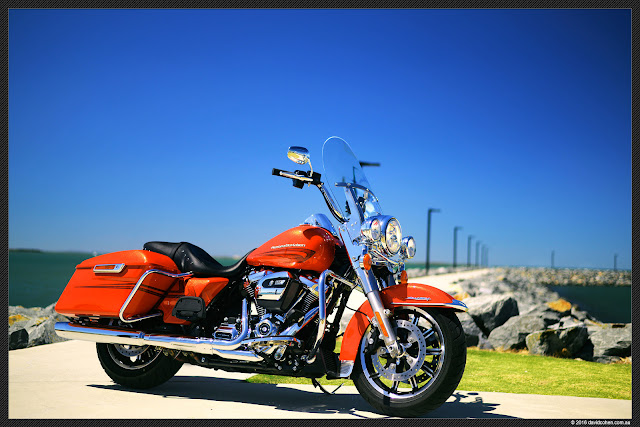 2017 Harley Road King.
Or the ‘Best engine yet’ claim bites me for the third time - because this is really the one. The Milwaulee 8 is Harley’s game changer. Even at idle it remains relatively smooth and that smoothness runs right through the rideable rev range.
On the freeway the engine is as close to vibration free as any large capacity twin. If there is a bike that makes the Super Slab enjoyable – this is it.
In cruising mode the tractability of the engine and overall easy going nature of the bike adds even more to the ‘Look at me! – I’m bright orange with lustrous chrome and awesome ‘stylez’’ appeal.
With the 2017 Road King Harley has taken their machine another giant stride forward,
It’s modern, efficient, polished and they have done it without compromising the Heritage style of the motorcycle at all. 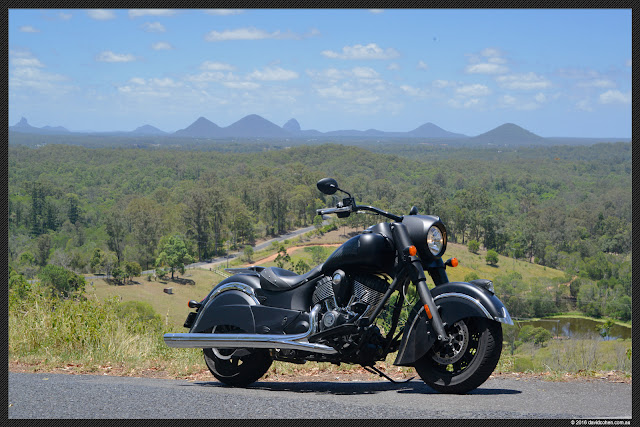 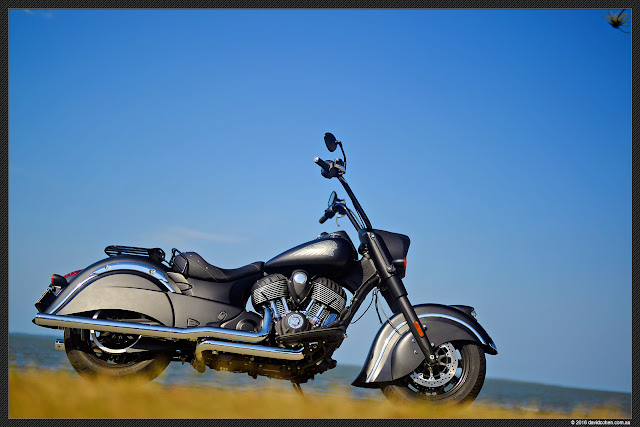 2 Indian Dark Horses.
I started the fortnight on a demo Dark Horse that had a few extras fitted. Ape hangers and a set of pretty loud Freedom exhausts, a sports filter and apart from that was stock.
I finished it on another shop demo, with stock handlebars, but this one had been fitted with the stage 2 cams.The difference was very noticeable and very, very enjoyable.
The cams take what is already a very accomplished cruiser to the next level.
Open road riding and touring are significantly enhanced with improved power and torque from the upgrade. 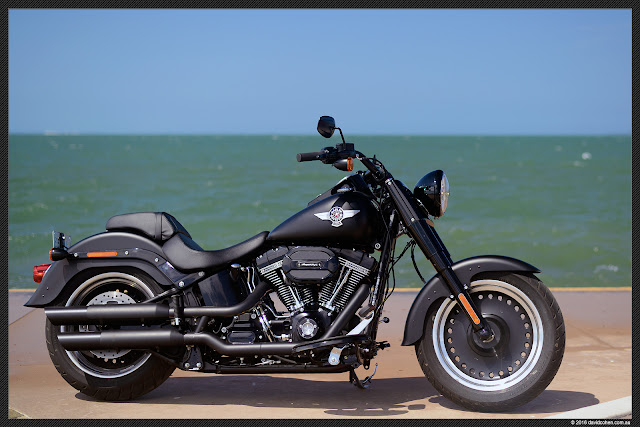 Fat Boy S
This one is in the garage as the year winds down. The 110B engine is still superb, the bike is a beautifully rounded package and it looks fabulous. Its Achilles is its 25 degree lean angles however. It’s a great cruiser, but it drags the boards often. I’d personally fit some forward controls and then it would be a hard machine to fault. The gearbox is one of the best, the brakes are top notch and it’s very comfortable, stable and reliably mannered – and then there’s always your inner Terminator pounding Guns n Roses 'You Could Be Mine' every time you throw a leg over.


So ... Bike of the Year?
Naturally only chosen from those I tested. As I do every year with this ‘award’, the criterion is simple. Line them all up and if I could keep just one – which one would it be?

The Morgan & Wacker custom builds were outstanding. Even the stock Low Rider S spoke loudly to me - as did the Indian Springfield - a truly magnificent machine, it almost yelled, but the M8 Road King sang a song that stuck in my head long after I returned the bike. 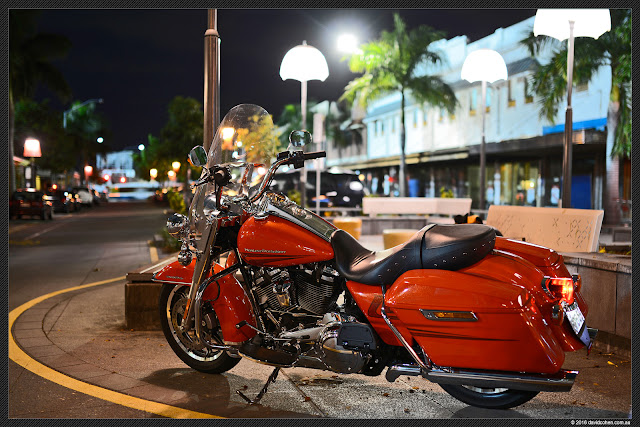 The new engine, the upgraded suspension, the way the bike goes and the inner smile it gave me would make it this year’s keeper. If you haven't already tried a M8 - do so.

The video reports and articles for the bikes are linked up from the menus on the LH side of this page.

Slide Show:
I covered quite a few motorcycle events over the course of the year and photographed dozens of bikes for sale too. Here is a slide show of the test bikes and a few favourite other snaps. 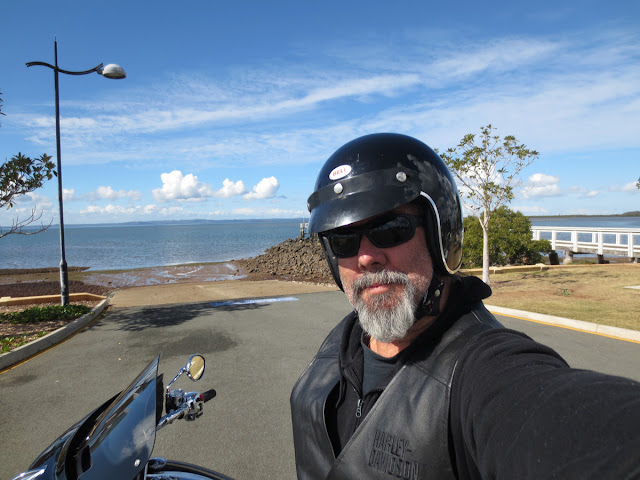