To Scotty's on a Springfield 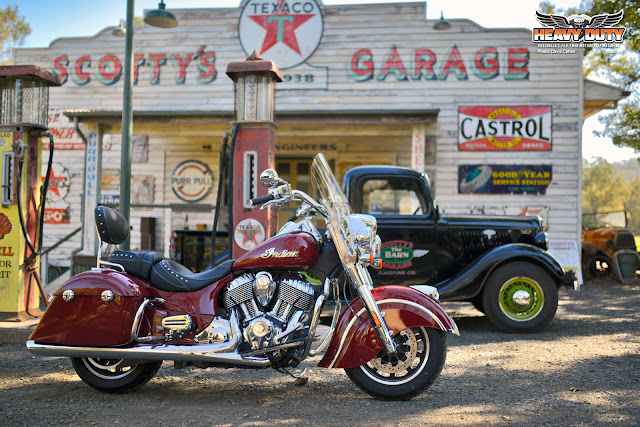 Friday July 29th in South East Queensland was typical of the lovely winter’s days you often get up here. Temperatures in the early 20c range, hardly a breath of wind and nary a cloud.

The photo gig I had booked for the morning was postponed, there’s grandkids running amok in the lounge room and I have Indian-Victory Brisbane’s new Springfield Demo bike in my shed for testing.

I didn’t need much encouragement. The Springfield has been a lust affair since I rode it home on Wednesday. Three days into the test and the desire has not abated, in fact with every run it’s only getting worse.

Editor Brum is doing the main write-up and the article in the Magazine, but I will produce video and some on online bits.

The challenge with photographing such a fabuloso looking heritage styled machine in and around Brisbane is that the city is so new and modern. There are a few older brick areas around the Showgrounds, but on the whole the city is a concrete, glass and steel environment and not old-ee world-ee at all. To the North and South of the city are the tourist strips and the same applies. Glass and pebblecrete.

The majority of the heritage buildings are further afield. Ipswich to the west, Toowoomba atop the ranges even further West, and the hamlets of the ‘Scenic Rim’ have better old-school buildings and backdrops (or ones that you can park a bike near anyway), but I was actually already decided.

Several of the crew had posted images on Facebook from ‘Scotty’s Garage’, just to the east of Toowoomba.

The maps app said it was 1 hour and 45 minutes from base and I hit the road at about 10:30am in the aforementioned ‘near-perfick’ conditions.

I wheeled onto the M1 and followed the Freeways and toll roads south then west for about an hour. For freeway cruising the Springfield is a joyous machine. It’s rock solid, virtually vibration free, enormously comfortable and quite luxurious.

The cruise control works well. The boys at the shop lifted the handlebars slightly for me and they now fit perfectly for a relaxed posture. The saddle is plush and the ‘flattened’ top of the crash bars works well as foot or leg rests if you need a stretch.

A quick fuel stop near Ipswich and in what seemed like no time I was at the Gatton turnoff. In hindsight I probably didn’t give due consideration to the route plan. I just entered the target address into my phone, plugged in the earphones and followed Siri. (1709 Upper Flagstone Creek Rd, Upper Flagstone QLD 4344) 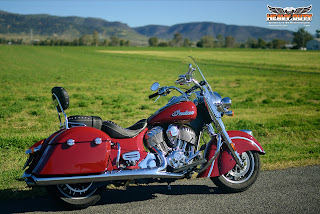 But today I was having the kind of luck where the App’s calculation of the most direct route was without doubt also the most interesting. After crossing the lush Lockyer Valley floor I followed narrow and (relatively) twisty back roads through the Foothills to Flagstaff Road and on to Scotty’s.

The Springfield is essentially a Chieftain without the fairing. Same geometry - with steeper rake that the other 111cui Indian models (The Classic and Vintage). 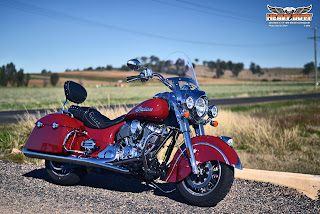 The Chieftain had always been the best handling of the Thunderstroke range due to that steeper geometry. But without the 20-25kgs of fairing, stereo, speakers and power screen hanging off the front forks, the Springfield now claims the title.

I’ve had the bike three days and haven’t scraped the footboards. I haven’t tried to – but then I haven’t ‘not tried’ to either. It has very good cornering clearance for such a big girl. Even on suburban roundabouts.

On the back roads the bike is also a delight. Same solid road manners, same big torque hammer, confidence inspiring ABS brakes and the best, easy shifting gearbox on a ‘big’ Indian so far. 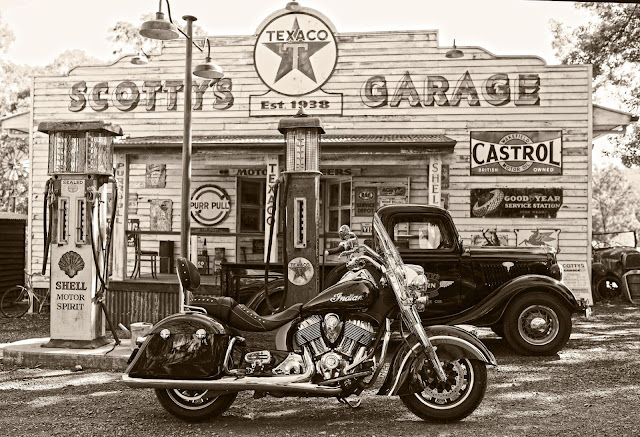 I was seriously in my happy place by the time I pulled in to Scotty’s at five past lunchtime. The quality of the photo op that opened up as I rounded the car park corner had me beaming.

By the time I had dismounted, unplugged and got my camera kit out of the (central locking) panniers the bike had drawn a small crowd of the pensioners who had also stopped for refreshment.

Yes, they still make them. Yes, it is beautiful. Your brother’s Indian was probably built in the 40’s. And all the ensuing standard enquiries that come with riding a new Indian.

I enjoyed it, and walked into ‘The Barn’ and ordered a snack with my newfound posse of grey.

The Barn part of Scotty’s establishment is just that – a farmyard barn converted into an eatery with a ‘travelling-food’ menu, al fresco decks and a pleasant outlook.

I took my leave and headed back outside to begin work on images. Later in the day would have been better for the photographing, light-wise, but even still, the garage setting was ‘only perfect’ for the job at hand.

Two lens changes, a quick snack, a heap of exposures, various angle changes and setups later, the proprietor, Scott, invited me to step inside ‘Scotty’s Garage’ and have a look at ‘his’ Indian. He was giving some of the paying customers the guided tour of what is essentially a small museum. He built the Garage as part of the site’s development and it’s only a relatively recent addition, but the work he’s done in giving it a genuine period look and the ‘rustification’ of the façade is quite a work of art.

Inside the building there are a number of examples of the engineers art. Several classic vehicles, motorcycles and assorted moto-paraphernalia fill the floor and cover the walls. The ’48 Chief is a stunner. 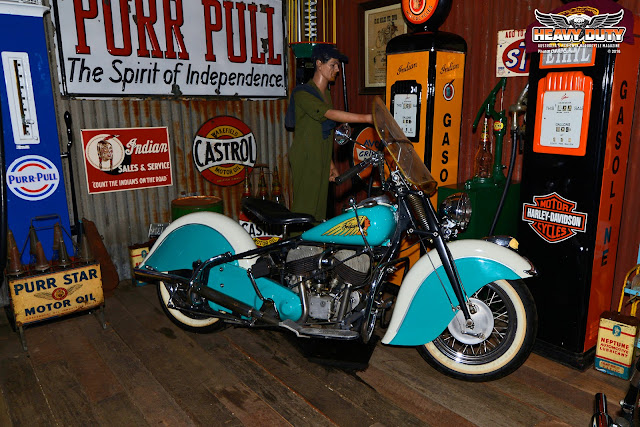 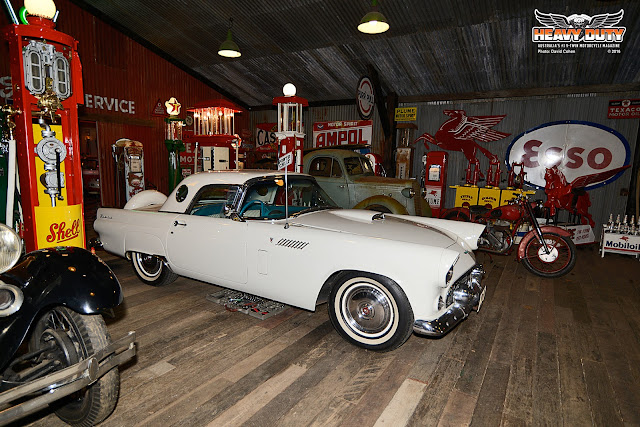 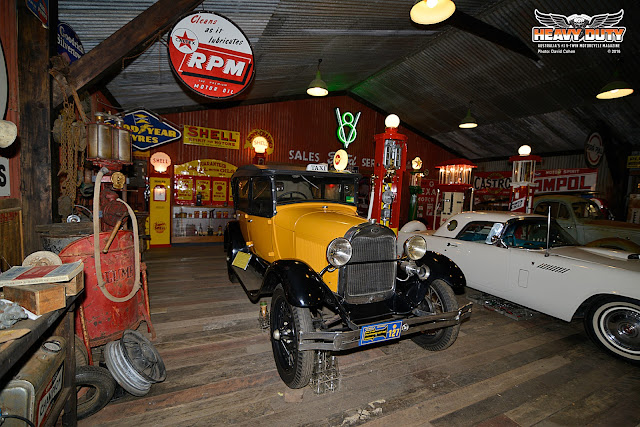 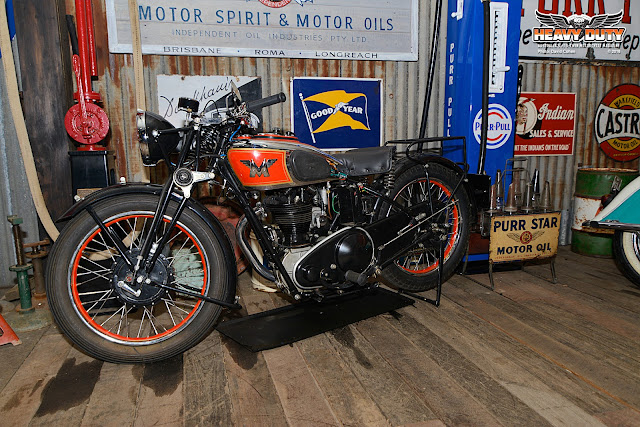 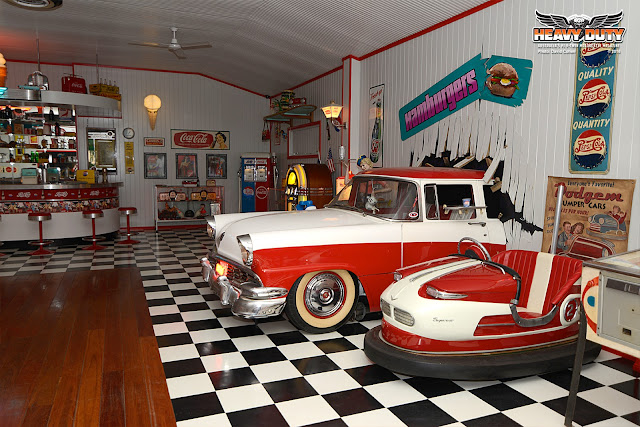 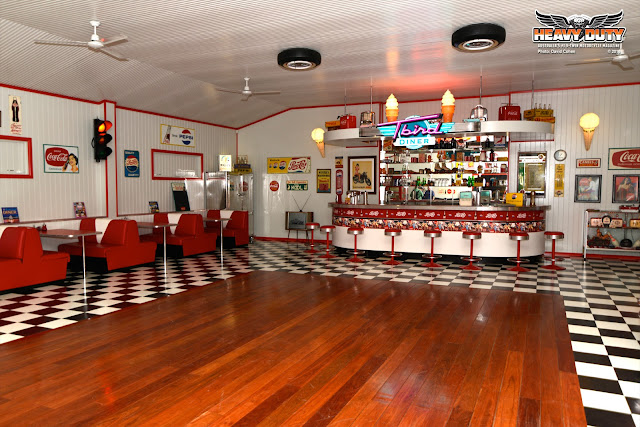 He then threw open the doors at the back of the Museum and it actually took me a little aback. The Thunderbird diner it revealed is somewhat reminiscent of the theme restaurant in ‘Pulp Fiction’. They cater for functions and it’s a quite spectacular small venue.

We then headed back to the bike and talked for a while about the venue, bikes in general and Indians, while I reeled off another series of pics. 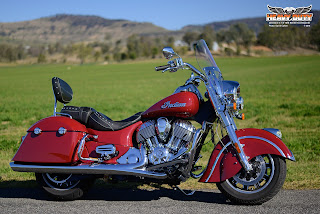 I can’t recommend the experience highly enough. Interesting, friendly - they even ‘stopped me’ with the chips – I couldn’t finish them all.

It’s an excellent riding destination, but if you are a big group – give them a call and book. The details are all here:

The shadows were starting to get longer as I retraced my route back to the Freeway and dialled in the Indian’s cruise control for the run home. I was early enough to beat the worst of the Freeway peak hour snarl and had an incident free run all the way back to the coast. Livin’ it LARGE.

I arrived home an even bigger fan-boi of the Springfield than I was before I left. It’s a premium motorcycle and as far as day-rides go … well … this one was worth framing.