Parts of this article were published in Kiwi Rider Magazine.

You know that saying ‘Bigger than Texas’? Well, the state of Western Australia comprises an area about 8.3 times that of Texas.

It ranks second or third on the scale of 'bigness' in such matters. The size of it tricked me a bit.

The terrain is mostly flat, featureless and remarkably empty, unless you like rocks, big rocks - or mining them.

The main exceptions are at the top, the coastal fringe and a fertile belt in the southwest corner, where most of the population resides, in a small chunk of a State that is ‘continentally’ vast.

‘Out here nothing changes. Not in a hurry anyway. You feel the endlessness…’ said the Goanna Band.

While the terrain isn’t ‘magnificent' epic like the towering alps of NZ for example, we did enjoy this ride immensely. It's just the West is different. It's ‘big’ epic and WA’s south is rich in the history of the region with a number of places of natural interest.

I’ve been trying to put it in context of a place that it resembles but there isn’t one that comes to mind, however, being on a motorcycle ‘out there’, in it, is still a great way to travel.

Particularly if you have the right tool for the job.

I picked up a beautiful Harley-Davidson Heritage Softail media bike in Perth and headed South to a pre-arranged rendezvous with the co-pilot at Margaret River.

We lived in Perth for a while in the 80’s and it’s still a pleasant looking city. It appears that the infrastructure, roads and transport systems are modern and efficient. That is, after we cleared the gridlock getting around the CBD and Swan River.

But this ride was about 'going bush', and once out of the ‘burbs’ the major freeway South is like well-engineered super-slap anywhere, although this one features a median with an inter-urban railway line separating the two road carriageways - for some of the journey.

An hour south of the city I veered away from the coast and headed inland, through quite rich agricultural countryside dotted with Towns and Villages sporting some very strange names – mostly they end in ‘up’, like Karinyup and Cookernup - from the Aboriginal word for ‘place’.

Bypassing the industrial city of Bunbury the road re-joins the coast road (SH10) not far past the City. I had a quick fuel stop near Busselton. It reminded me of the satellite cities on the edges of the big urban sprawls in any number of places.

The alternative to the inland route is to head south straight down National Highway 1 from Perth. It’s Freeway conditions most of the way, but along the coast are shipyards and heavy industry on a scale that machinery buffs would also appreciate.

Beyond Bunbury the road veers a little way inland and flows through the start of WA’s famous Wine Country. The roadside vineyards became more common and Margaret River rendezvous arrived after an easy 3-hour ride.

That night, pawing over the maps and weather forecast, a ride east to Albany, and back, looked like it would be another ‘pretty easy’ two days.  Plan.

The township of Margaret River is around 5km inland and next morning we had a choice of two roads heading south. One was Route 10, The Bussel Highway, or the more picturesque Caves Road, a little closer to the coast.

Both roll through a mixture of native forest, wine growing and fertile countryside.

With time in mind we took the inland route, directly down to the town of Augusta and our first picture stop near the lighthouse on the promontory of Cape Leeuwin.


The cape is the most south-westerly point on the Australian mainland and is considered the junction of the Indian and Southern Oceans. There are no traffic lights at the junction - but the picturesque Lighthouse is certainly worth a look.

After a quick scoot around the town and its pretty foreshore, we made our way back up to Karndale junction, fuelled up at a typical ‘outback’ corner servo - complete with sly dog, checked the map, and wheeled the Softail east, into the sprawling bush, already behind schedule.

Like Springsteen said, ‘Open up your engines, let ‘em roar, tearing up the highway like a big old Dinosaur!’

All of a sudden we were on roads that were pretty much deserted. Very light traffic and the wide-open wine country soon gave way to native forest and long straight-straight-straight sections through tangled Eucalypts.

Conditions were warm and we were sitting back and watching the kilometres roll by, enjoying the Softail’s comfort and purr.

At Beedelup we slowed to drink in some of the majesty of the Southern Forest.

As the elevation changes, so does the vegetation. Massive stands of mighty Jarrah and graceful Karri trees line the road, dwarfing all that travel beneath them. Massive organisms.

The fresh forest air, smell of Eucalypts and shafts of sunlight piercing the canopy added a golden touch to a glorious scene. You miss so much in a car.

We stopped and did the short bushwalk to the Beedleup Falls, enjoying a quick break and the pleasant paths.

Now even further behind schedule, and still a long way from Albany, it was ‘Purr time’ again. We gave the Softail some wrist and it did beautifully.

Beyond Beedleup the road joins National Route 1 near Pemberton, from there it sweeps southeast through the forests for another 100km or so, before joining the coastal fringe just short of Walpole.

Here the terrain changes again and the countryside becomes more open as the road winds its way slightly inland on the Western reaches of the Great Australian Bight.

Being National Highway 1 it carries slightly more traffic, with some big, big Trucking rigs travelling interstate - along with local tankers from the rural communities spaced along the way between Walpole and Albany.

Still, nothing the Softail didn’t peel off and overtake with ease.

We stopped and refuelled in picturesque Denmark, but the shadows were already lengthening so though it’s also worth a look around some of the local attractions, particular the Forestry, we pushed on through the open farmland that skirts the coast and our night’s accommodation at the ‘Dog Rock Motel’ in Albany.

We arrived just on sunset, very happy and quite fizzy after what had been an outstanding day’s ride. We’d covered around 500km including detours and photo stops.

As we checked in, it also became immediately obvious why the area is called ‘Dog Rock’. IF there is a geological feature that more closely resembles an animal – I’d like to see it.

Once our gear was stowed, we headed downtown for our first visit to Albany Town since the early eighties. It appeared not a heck of a lot has changed since then either, and that probably isn’t a bad thing.

There’s some interesting new architecture at the Arts Centre on the foreshore, but the essence of the town seems unchanged.

We settled it to the window seat at the Venice Restaurant, enjoyed a glass of the local shiraz, had quite a sumptuous meal and sat back and watched the boys in blue stalking the boys in their hatchbacks who were watching the girls cruising town in their Celicas. It was like some sort of twin-turbo version of ‘Antipodean Graffiti’.

After a nightcap back at the hotel we dialled up the map and studied the options  back to Margaret River - just before falling into one of those night’s sleep that follows a really good day in the saddle.

The morning weather forecast revealed shower activity along the coast so we decided to take the inland route back to base. 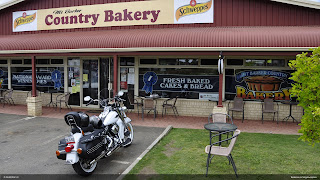 After a final cruise around Albany town and a few photo sessions along the coast, we struck north towards Mt Barker and breakfast at the fine Bakery in that town. ‘Best Pies in WA the window proclaimed’. Who am I to argue? The Town itself could be best described as sleepy. ‘Out here nothing changes….’

We also stopped at the clothing store in town and bought a new sweatshirt each for under our leathers. The temperature had plummeted the further inland we travelled. It was downright cold  - desert cold - 50km from the coast.


From Mt Barker we wheeled westward onto Muirs Highway (route 102) and followed the straight and virtually empty roads for the best part of 200km to Mamjimup. We saw two cars and one bike in those 200km.

We rolled through one-horse towns like Perillup and Rocky Gully along the way.

The emptiness gave way the further west we travelled and the vineyards and tourist attractions became more frequent.

We stopped for a look at Lake Muir, but it was virtually empty, the waterline a distant shimmer on a green, flat, empty plain. It should be called ‘No-lake Muir’.

We rounded up a couple of emus strutting beside the road near Deeside as the road had headed back into wooded forest country briefly, but the terrain soon opened up to pasture, just before the town of Manjimup.

Even with all the photo stops we’d made great time on the empty roads and after refuelling we enjoyed a healthy - and leisurely lunch at a nice café in the town.

After refreshments we turned south and then west, back towards Pemberton and retraced our way along route 10.

From there it was through the awesome forests again (well worth seeing twice!) and the temperature had climbed to become very warm again as we returned to the coast.
Not far beyond the Forests, Co-pilot had her wish and we stopped at some delightful wineries and Art Galleries along the way. 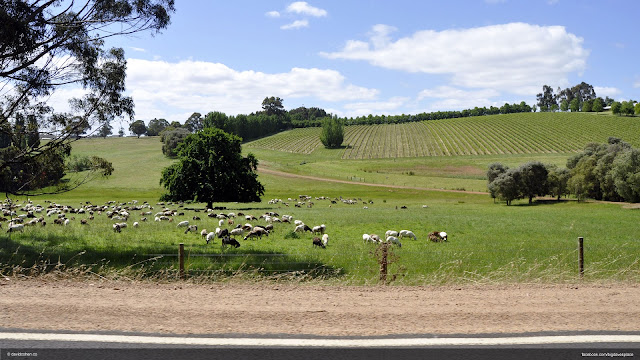 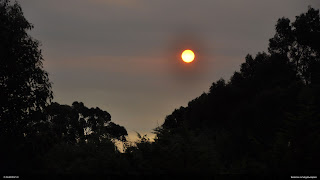 We arrived back at Margaret River just as the bushfire smoke-shadowed, blood-red sun was setting, ending what had been a marvellous riding adventure in the Golden West.

After another night in and great meal in Margaret River and then we made our way back to Perth along the coast Highway the following morning.

What looked like a few hour jaunt on paper when we were planning it, turned out to be the best part of all-day-every-day riding and well over 1,500km in the saddle. 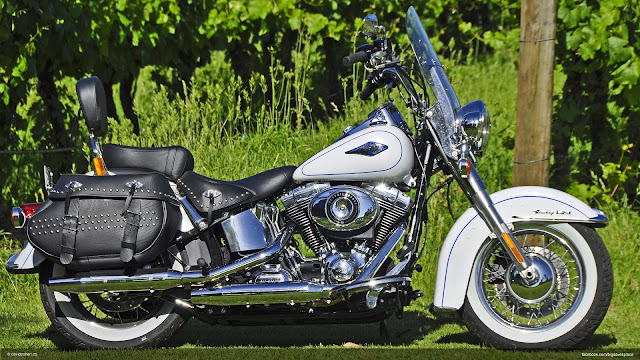 The Heritage Softail was superb; comfortable, powerful enough for the job and a real head turner everywhere we went. It was ideally suited to the roads and the riding conditions we encountered. 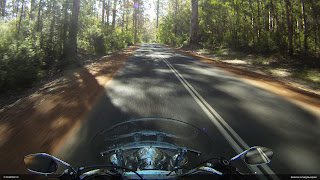 The Southern Forests of Western Australia are  truly worthwhile visiting, it’s quite a wonderful place to ride and explore on the right bike.

We wished we’d had a few more days.

Just make allowances for the distances when you check those maps.