I've had a Cycle computer fitted for a while now. Mainly because it has been interesting to see what sort of distance we've (me and the dog) covered.
A magnet on the spokes passes a sensor on the forks and the machine counts revolutions. Pretty basic set up, but it counted a bit over 1,500km in 10 months. It's mainly about the exercise, but I enjoy riding it and the dog loves the run. It's easier when it's fun.
I tried several computers. The wireless unit didn't pick up the signal from where I wanted to mount it, so it went of the Co-pilot's bike. The wireless computers also require a comparatively large transmitter mounted on the forks, so I was using a hard-wired unit, but then that introduces the inefficiency and clutter that running wires up the frame and steering head entails.

The other day I spotted the 'Garmin 200' Edge while surfing around for other components and thought...'hmmm interesting'.
Then at the bike shop yesterday I grabbed one. $A130 after haggling. (Insert L.O.Brian 'Gord scene' here).
I fabricated a new mounting bracket for headlight and new 'dashboard' (from a strap/gate hinge) - and it's all working quite well.
Switch it on, it takes about 30 seconds to connect to the satellite - and off you go. There are tons of different settings and computations available - but t'unit displays speed, distance and time quite legibly in broad daylight.
Then back at base, connect to the computer via USB, log on to the Garmin site, upload and there's a geek's-worth of data.

It is capable of speeds up to 99mph. I wonder if you could use it to replace the dashboard, cables and electronics on certain types of motorcycle - motards eg? There are probably better options for that, but for $130... 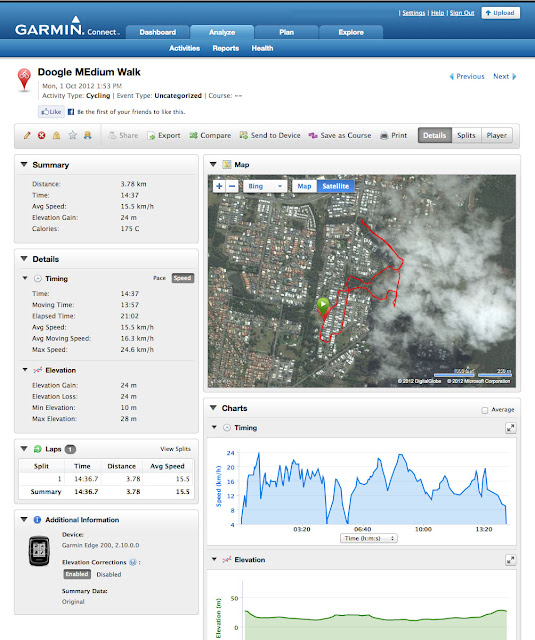