The expedition to the launch of new BMW K 1600 GT and GTL was a real ‘Yin and Yang’ affair.

The days spent travelling to and from Northern NSW were a bit of a drag, with cancelled flights and hours waiting in Airport ‘limbo’.

The Press release and ride were exactly the opposite: interesting, fascinating, great fun and quite exhilarating.

Amongst the keepsakes I brought back from the expedition is a Boarding Pass for a Flight that doesn’t exist, but all that pales at the recollection of these spectacular machines.

‘Best’ is a long bow to draw I know, particularly if you’re in the ‘as long as it’s got an engine, handlebars, two wheels and a seat - it does me’ brigade, but the K 1600 series bikes really are technological marvels that provide a wonderfully efficient and relatively safer means of riding.

When we (the NZ Press contingent) arrived at the Peppers Resort at Kingscliff NSW it was mid afternoon and conditions were mostly sunny, with temps in the early 20’s.

We had time for a stroll around the resort and the endless golden beach before settling in to the information sessions held in the conference rooms.

The show opened with a presentation by BMW Motorcycle Manager Tony Sesto. He gave us a quick outline of where BMW had been, is at, and where it is going.

I found his reference to Dr Diess’s (Motorrad head honcho) speech at Intermot 2004 most interesting. The good Doctor drew a line in the sand and talked of a ‘global repositioning’ and ‘changing BMW’. I recalled reading the context of the speech when I was researching the KIWIRIDER test on the BMW R1200 S not long after, thinking ‘so far so good’. That was further reinforced with subsequent rides on the HP2 Megamoto, K 1300 S and several GS 1200’s.

So it was that I arrived at this launch as something of a re-enthusiast of the marque I thought had lost its way in the nineties (I rode some dull bimmers back then) - but has since be re-found.

The new 1600’s are the next step in their evolution of dynamic riding machines. And like all the BMWs I’ve thrown a leg over lately - dynamic they are.

Following Tony’s presentation, Miles Davis, the Marketing Manager took the mic and gave us an overview of each bike. It took quite some time to run through the overview, such is the list of standard features and the amount of adjustment, information and data available from each bike.

Question time followed and by the time we were done and headed out to dinner we were chomping at the bit for the big test ride. 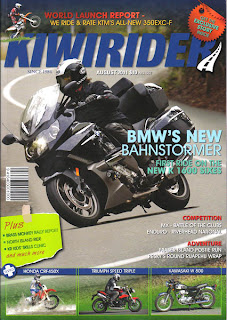 We got to sample exactly how dynamic the new K sixes are on a group ride through the Northern Rivers back country of New South Wales.

The Northern Rivers district sprawls from the Clarence River and Grafton, northwards along the coast to the Tweed River and the Queensland border. Big country, partly rich alluvial plain, bordered on three sides by the weathered spurs of the Great Dividing Range, meandering, like the many rivers, to the coast.

As such, the eastern-most part of the continent in early winter is an ideal region to sample a varied mix of road and riding conditions, with many of the same attractions, and hazards, as riding in New Zealand.

Thirteen K 1600s, with examples of both models (and four colour schemes), a GS 1200 and two support vehicles left Peppers Salt Resort after a quick ride briefing from Miles.

We did a short leg on the super-slab down to a Coffee stop at Byron Bay where the large fleet of expensive bikes drew a crowd of multi-coloured cheesecloth and tote-bag wearers away from their sifting around the beach.

Caffeine levels boosted, Hippies enlightened, we passed back over the Coast highway and made our way inland towards Lismore.

We ran in reasonably heavy traffic all the way too, but once we got through Lismore and further west, the roads and the countryside opened up, and so did the throttles.

We skirted the foothills and ranges in an arc that took is back to the north into Queensland, via the Border Ranges, before heading south east again towards Murwillumbah. Then it was back to base through the excellent twisties of the Gold Coast Hinterland.

We clocked up around 450km on a great variety of roads. From open plains with fast sweepers, to tight mountain descents, from rickety timber bridges to super-highway and the bike nailed all of it.

Much of the last 50km was in pitch black on mountain roads – so we could see just how well the adaptive headlight works.

It was a brilliant ride – on a brilliant bike. Parts of it were quite Unzud-ish, particularly the twisty, winding roads through the Border Ranges and their lush, sub-tropical rainforests dotted with tree ferns. The main difference in riding was significantly (a lot) more double lines than here, while the hot-mix, rather than chip-seal, is generally easier to trust.

The day featured regular photo stops for Lou Martin’s images and employed the corner-man system faultlessly till we lost one on the very last leg back to base in the dark – but then the GPS came to the fore and we were all back at the Resort by pre-dinner drinks.

It was down to about 16c in the ranges, 21c on the valley floor, and the day was mostly a bright overcast, but it was a truly outstanding blat on a fabulous machine.

Refer to the paragraph regarding ‘best’ above.

Take the luxury and accoutrements of a Goldwing and the downright schtonk of a Concours 14 and put them in one package.

160 ponies and 175 of Mr Newton’s Meters. A Rocket III tourer is the torque daddy of production bikes and it has 203Nm, so the six is up there.

The acceleration isn’t the ‘rip your arms out of their sockets’ of a modern hypersports, it is hauling 319kg wet (306 dry), which is reasonably light for an ultra-luxury tourer, but still a considerable mass.

It produces very rapid progress nonetheless and the torque of the six cylinder engine is a remarkable thing. Disengage the Traction Control system and it will easily power stand, just on throttle – no clutching needed.

More real-worldly is the way you can be barrelling along at touring speeds, come to a 40kph country school zone for example, slow down to 35kph, and then back up to touring speeds without any need to change gear. It pulls without lugging, smoothly and quickly back to where an autobahn would be handy - in no time.

The BMW telelever and paralever suspensions work beautifully. We did some pretty good runs through twisty mountain roads along the NSW border and the bikes handle sports type riding with aplomb. The big torque, solid handling and confidence inspiring ABS have me looking for the thesaurus in search of another word for ‘dynamic’.

Inclusions and features we can only gloss over – the detailed press release and technical notes that came in our ‘goodies’ pack is 45 pages long. We have that .pdf – and over twenty minutes of video, including excerpts from the presentations and some ride video on the KR web site (keyword: K1600). It’s worth checking, just for how good they sound.

The highlights of the inclusions will even take me over the Ed’s word count but there are some standouts.

The Aus and NZ markets get the bikes delivered with ‘all the fruit’ included. ABS, Traction Control – ESA2 (push button suspension adjustment) all standard. The only obvious extra to add is your choice of GPS.

It has the most sophisticated ride computer and is the first bike I’ve seen equipped with a ‘mouse’ to operate it. There is an extra ring on the left hand switch block to click and scroll through the myriad of functions. It even displays tyre pressure on the dashboard.

The adaptive headlight really does shine around corners. Dark mountain roads are beautifully illuminated, particularly with the GTL’s extra driving lights, but the GT’s are still quite brilliant too.

Style-wise I found them to be attractive luxury tourers to look at. The luggage is top notch - in terms of capacity, appearance and function. Easily removed for a sports ride – and don’t believe this unit won’t keep up on a sports run. It’s got some real hurry up. Best windscreen I’ve used too.

These Ks really are special (geddit). They eat big distances for breakfast - at a very rapid rate and really do live up to the dynamic tag when the road gets interesting. They have fruit on the fruit and a very comfortable, stylish package to deliver it in. The 24 litre tank gave well over 300km between stops and I found the saddle comfortable all day.

The six is only a bit over 60mm wider than the K1300 four. It’s still a large bike, but in no way is it ponderous. It’s just wicked.

If a stand out in hi-tech motorcycle efficiency pushes your buttons, talk to your BMW dealer about the new K 1600 series bikes.