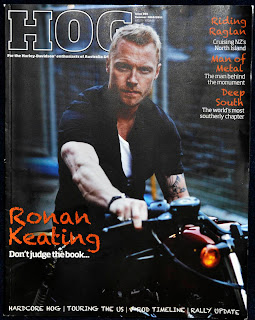 Here's the draft of the Interview I did for H-D with Ronan Keating. What a nice bloke he was too.
------------------
Ronan Keating was born in Dublin in 1977, the youngest of five brothers, and he has had an enormously successful and popular musical career, starting with the band ‘Boyzone’ and continuing as a solo artist. He holds records for consecutive top 10 chart successes, has sold over 20 million records, has become a renown philanthropist, raising millions of dollars for Breast Cancer research, and yet remains very personable and easy to talk to. It was with motorcycles in mind that we caught up with him in Sydney for a chat.

‘When I was very young we used to ride around the fields at home. We rode old scramblers and things. Anything with an engine in it we were playing with. Tinkering around with it. We had an old 125, an old banger of a thing that we used to fly around the fields on.’ He recalled fondly, in an engaging Irish lilt, when we asked of his riding experience.

As the age of sixteen he joined ‘Boyzone’. At seventeen his good taste in bikes was evident when he bought his first, a Harley-Davidson Springer Softail, which he acknowledged ‘that for your first bike, this was quite a jump’ referring to the size and power of the machine. ‘I did quite a bit of work on it too, but it was a case of as soon as I got my full licence I just went out there and bought something really nice.’

That penchant for really nice motorcycles has continued throughout his stellar entertainment career. Not only with bikes featuring regularly in his visual arts, but off stage as well. ‘Yeah, anywhere I travel and am in town for a while, Harley always look after me, so I get myself something nice and really enjoy it. I just spent six months in Los Angeles, travelling around the city and up the PCH (Pacific Coast Highway) as far as I could go. That’s probably my favourite route in the world. The highway from LA to San Francisco, it’s just the most magical piece of road in the world.’ He said with the sort of zeal borne of a true enthusiast.

‘I had a V-rod muscle there recently and took it up the PCH and it was just ridiculous how good it was – loved it.’

That enthusiasm for riding was also evident when he confided ‘I try to get on my bike every day. I do. Weather and work permitting, it doesn’t always work out, but I’m the type of guy that would rather be on his bike going to work, rather than being chauffer driven, so any excuse I can come up with to get on my bike – I’m gone. Lately I’ve just been riding around Sydney, going out to the beaches, out to Palm Beach, which was a great ride, magnificent.’ He continued.

‘I’ve actually been doing a lot of riding here and if I come back for the show (X factor) next year I’m going to do a proper tour. Take a week out and travel, find a good route and do it properly.’ We’re sure that there are several thousand HOG readers that would gladly act as Road Captains.

In case you are wondering what else a 2010 mega star rides? The answer was as we had come to expect - tasteful. ‘V-rods. I have a Bumblebee (Yellow & black) V-rod here and a V-rod back in Dublin – the Night Special. And I have an 883 at home as well. It has a bit of custom work on it, but I’m actually going to buy one of the new 48’s. I have a small workshop in my home and I’m going to strip it and do the work on it myself’ he said. ‘I’m going to put a bigger tank on it, change the fenders, some custom wheels and tyres, you know, I’ll just play around with it, new handlebars, clocks will be custom, and I love that old school wrapping on the pipes. I really like that look.’ Said the man who obviously knows his bikes.

On that subject he continued about the importance of the new Sportster models. ‘You know, I’ve convinced two of my friends down here to buy the new 48’s. I think it’s the bike that is going to make the brand really, really cool again, it will re-introduce cool to a whole new younger generation’.

So speaking of cool, we enquired as to whom a star would ride with. ‘Larry Mullin from U2 is a good friend of mine and we do a bit of riding together, he loves his Harleys. But I just like the enthusiasts, people who appreciate the machines, have a bit of history and a bit of knowledge. Of course there is Jay Leno, he loves his bikes too. Larry, Jay, Steve McQueen and me, Steve has always been a hero of mine, that would do me for a ride, anywhere.’ We’d gladly carry the bags!

Our conversation then drifted on to that reasonably common rider’s subject; tattoos.
‘I started getting tattoos when I was about eighteen. I got my first one in London and you know how it is, once I got my second one I didn’t stop. They range from Japanese water tattoo to tribal designs. Stephen, my friend who passed away last year had a Superman tattoo on his chest, and all of us in the band now have that tattoo and I think it’s my finest bit of work. On my back I have the words ‘The future is unwritten’ which is a Joe Strummer (Lead singer of The Clash) quote which I think is beautiful. Brilliant.’

To conclude, we asked what it was about motorcycles that still attracted him? ‘Oh, I could sit and chat about motorcycles all day, I’m a big fan, massive fan of bikes, my passion and love of motorcycles is the freedom, you know, I put my lid on and I’m gone. Nobody bothers me and it’s just me and my bike and everything else has to be switched off, because you have to have your wits entirely about you. 100% concentrating on riding the bike. There is nothing finer than that. It’s the most magnificent feeling.’

He wasn’t kidding about enjoying chatting about bikes and Harleys in particular. Our time was full of laughter and shared joy in the freedom of the ride.

Next time you are out and about and spot a cool V-rod or nice custom 48, take a closer look at the rider, it could be a fabulously talented, world famous entertainer, who’s also one of us.
Email This BlogThis! Share to Twitter Share to Facebook