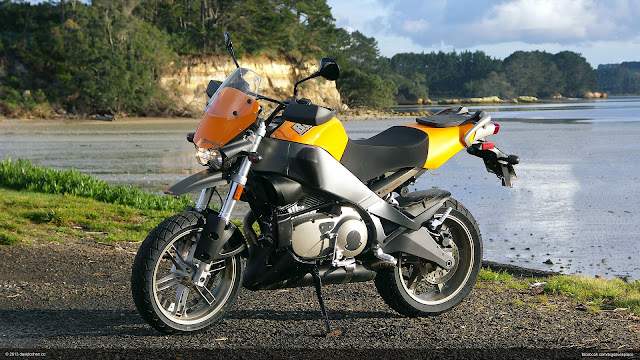 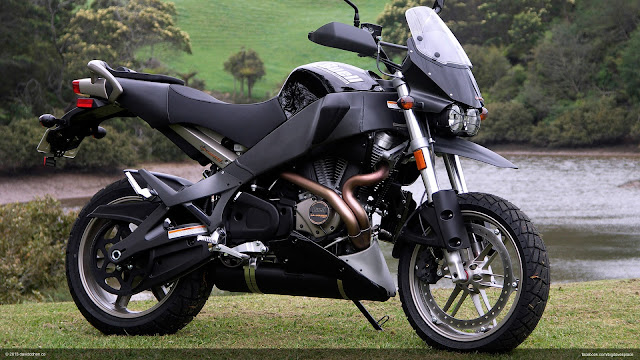 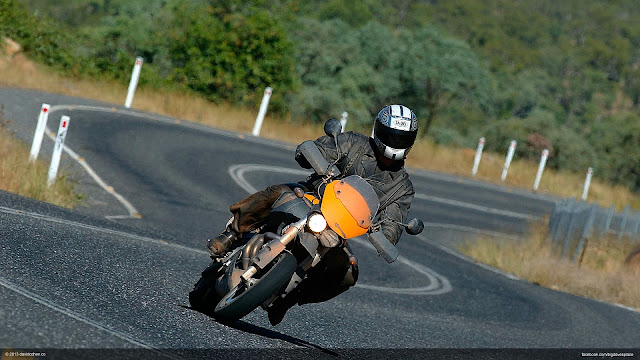 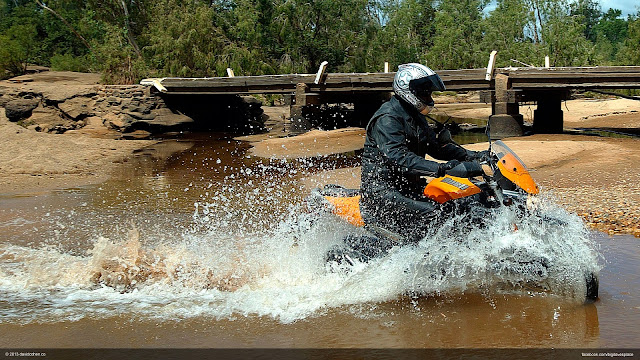 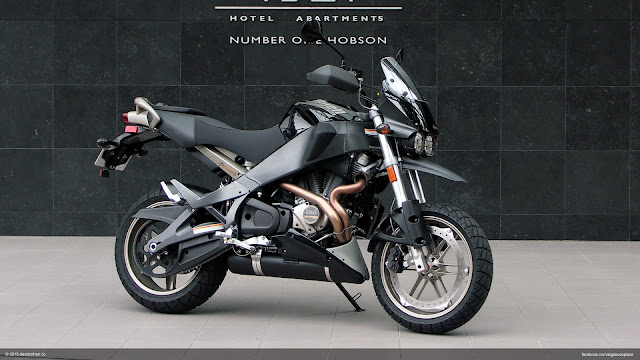 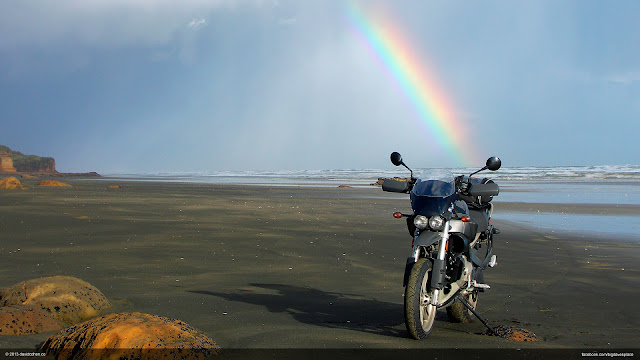 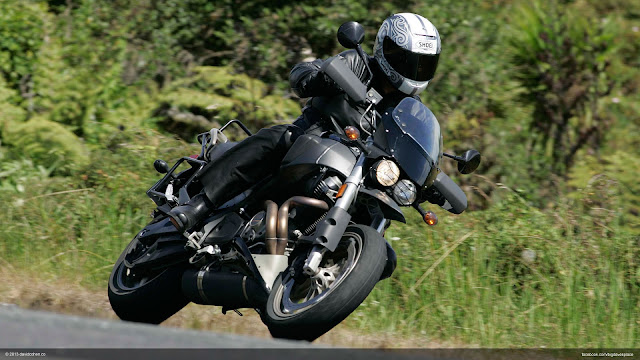 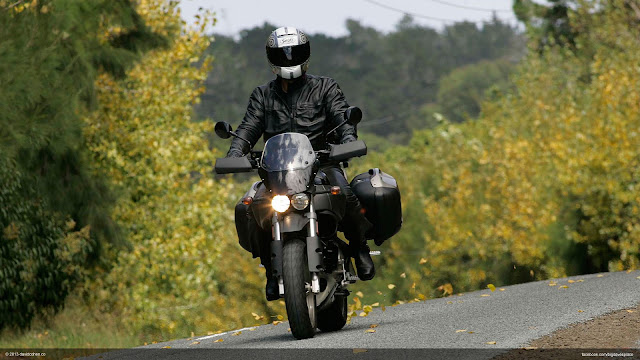 The Advert in the personals column would have read something like: ‘tall guy, recreational sports/touring rider, seeks to meet interesting, attractive looking motorcycle for mainly road and city action. However, some ability to handle dirt roads would be an advantage and must be comfortable carrying a passenger.’

Those gaps on the map showing roads we haven’t ridden - because of the odd 50k’s of dirt - were beginning to annoy the co-pilot and I.

We’ve covered pretty much all of the sealed parts of the National road system that are designated by a number in a red shield - on our road bikes, but we want to see ALL of NZ – but there wasn’t a dual sport bike on the market that really ‘pushed our buttons’.

‘My goodness! A tall person’s bike!’ Were my first words when I sat on the Buell XB12X.

I liked its angular X look and concept from the start. In these days of diminishing saddle heights and bikes getting smaller and shorter in the chase for light weight and improved handling, it was refreshing to sit on a tall, high performance motorcycle.

Yep, I said ‘high performance’ motorcycle. Although rated at only 100 ponies (modest by 2006 sports bike standards), the Harley-Davidson V-twin’s superb torque and the speed the chassis can comfortably carry into corners makes it a quick machine through the twisties and demanding sections.

In the long list of dream motorcycles I’ve been fortunate enough to throw a leg over in my time at KR - this is the best cornering bike I’ve ridden. It’s surprising that more manufacturers have not adopted Buell’s principle of ‘mass centralisation’. It really works.

To keep as many of the heavy components as close to the middle, and as low down as possible in the bike, several innovative ideas have been employed.

What most motorcycles present as the top of the fuel tank is nothing more than a plastic cover over the air filter. The fuel is stored in the substantial box section frame, with a traditional filler cap. Notable that the crash protection ‘frame pucks’ on the XB12X are now available for the entire XB range.

Additionally, the dry sump engine stores its oil in the rear swing arm assembly and the heavy muffler is slung underneath the engine - amidships.

The confidence it instils! Buell talks about the ‘bike being part of YOU’ and as hokey as it sounds, the concept really clicked with me as I had the XB hard out on my favourite stretch from Waihi to Whangamata. I’ve never been through there quicker or enjoyed it as much…like the bike was part of me.

Sometimes you can just let it ‘fall over’ in the corners, then casually pick it up after it’s gone around far enough, other times it’s exhilarating to physically manhandle/throw it through the apex and feel the temptation bounce the front wheel airwards a tad on exit.

It’s pushed along by the new Harley-Davidson ‘Thunderstorm’ engine. Wonderfully strong low down and it develops enough ‘grunt’ to more than compensate for being ‘tapped out’ at 7,000rpm. Its torque is a thing of beauty.

As soon as it hits cruising speed, the shake that the air/oil/fan cooled, four stroke, 1203cc 45º V-Twin produces at idle entirely disappears. It transforms into a sweet sounding, smooth, honey of an engine. Peak power is achieved relatively close to the 7,000rpm redline and torque (81 ft-lbs / 110 Nm) arrives at 6,000rpm.

It means there’s no need to ‘row’ the gearbox through the corners to ride rapidly. The even power spread and torque mean gear changes are minimal. Plug in 3rd and just carve up!

It’s not that changes are a chore – gears engage with a definite, reassuring click, with no signs of a false neutral or that old Harley trait of difficulty selecting true neutral when stationary. It just means you can concentrate more on how well it goes around corners.

The belt final drive is well shielded, has virtually no freeplay and requires no adjustment or servicing for the life of the motorcycle. Its smoothness and directness provide great feel and feedback.

It’s real fun to launch from standstill. A bounce and a twist sends the front wheel as easily skyward as does grabbing a handful of the triple piston radial front brake to produce an impressive stoppie.

In the effort to keep unsprung weigh as low as possible an inverted rotor, radial brake set up is used, significantly lighter than a dual disc system but with similar stopping power.

Because the torsional forces are distributed directly to the wheel rim and tyre - rather than transmitted via the hub and spokes – there is less flex under braking and subsequently you can stay on the picks far, far deeper into a corner.

Then we added ‘exploring’ to the mix. That’s been much of the attraction of this ‘all roads’ machine. Pick a road, turn off and not care where the seal ends.

It’s not what the ride-up-mountainsides-fraternity call an ‘Adventure Bike’, but that’s not what we’re about.
193kgs, the muffler where a bash plate usually is and the large warning on the inside front cover of the owners manual advising that the machine is ‘FOR PAVED AND NON-PAVED ROADS ONLY’ – means you probably don’t want to hit the southern traverse with it, but the fantastic ‘adventures’ we’ve had on the dirt roads around the upper North Island have proved its ‘track’ manners most satisfactory.

It won’t make ‘the pace’ with a bunch of dedicated dirt bikes on the shingle – but it’s not too far off it. It does OK, and when you get back onto those super sports bike roads that usually occur on either side of the dirt sections, …hmmmmmmm baby!

The dual-purpose Dunlop 616 tyres handle unmade roads and hard packed beach sand well enough, considering how well they performed on the tarmac. The 180 section rear works well, the 120 section front can drift a bit over the top of freshly graded shingle, rather than bite in, but it’s easy to adjust speed to suit.

Did I mention I was having fun? It was time for a serious heart to heart.

‘We have got to get one of these.’ Said the Co-pilot before we got to the lights at the top of our street, the very first time she rode on it.

250 mtrs. I almost did a Linda-Blair-Exorcist-style head rotation as I swung around that fast to look at her.
‘OK.’ I said.
Heart to heart over.

‘Big, roomy and comfortable and I love the way it goes – I’m having fun again.’ She rates it the ‘most comfortable bike she’s been on’.

I can’t keep off it.

So look out Ripple Lake, Cape Reinga and the top of the Coromandel - for starters. Here we come.

Recommended retail price is $19,995 plus orc and there is a range of luggage options.

It’s not often you find a bike just about perfect for your needs, but a chance meeting with an XB12X means I’m forgetting about those adverts in the personals for a while.