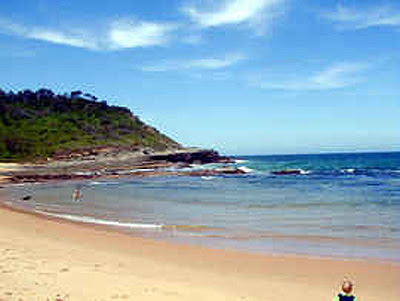 ‘Do you want it now?’ she asked me, all bubbly with Christmas Eve anticipation that had spilled over to the kids, or vice-versa.

I kind of figured that she had bought me the new boogie board that I had been hounding her about ever since we moved into the pole frame bungalow perched in the suburban dunes, a few hundred meters above Foresters Beach on the NSW central coast.

Five & Six year olds in tow, we thought we were off to spend one of those azure afternoons under a blazing South Pacific sun and in her enthusiasm to make the most of it, she offered me an early treat.

‘Sure, I can have a float about with the kids and pick up a wave, there’s that cyclone up in Queensland and the radio says it’s huge swells.’

By the time we got to the top of the timber stairs that run down to the sand it was obvious that a ‘wave with the kids’ was no longer on the agenda.

We were at the very northern end of a strip of golden sand that stretches ten kilometres or so around a wide bay from the resort town of Terrigal and the famous escarpments at its southern end, to the rocky outcrops of the smaller ‘Spoon Bay’ that lay before us.

As far as the eye could see, the ocean was a seething mass of cyclonic ground swell. The police later told me that it was running at about fourteen feet. Even the beach break was booming and closing out with an almighty thud.

The disappointment on the kid’s faces at the sight of the crossed flags soon faded when dad pointed out that, ‘Even though the beach is closed, we can still go and have a paddle round Spoon Bay.’

The bay’s northern headland and broken rock shelf to the south formed a natural breakwater. It was quite sheltered from the pounding of the main beach and was only a few feet deep for quite some way out.

I left the board with Jan on the sand and was mucking about in two feet of calm-ish water with the young’n’s when an old bloke, floating on his back, toes in the air, oblivious to the world and having a great old time, just drifted straight into us.

‘Yeah, good on you mate’ I wished him well as he apologetically changed course. He reminded me of my father-in-law and his love of the surf.

He did a few more laps of the bay while I splashed around with Amy and Matthew for a bit longer. The next time I looked up, bugger it - he was in deep, deep trouble.

He was still on his back, but he was caught in a huge rip and heading out to sea fast, really fast. He looked me directly in the eye and said ‘Help.’

What do you do?

I looked about. Nobody else was going to have a go, they were purposely looking away, and the nearest lifeguards were at Terrigal.

‘Kids, get straight out of the water and stay with your mother’ which bless ‘em, is exactly what they did as I raced back up the beach to grab my new boogie board.

By the time I reached him we were both in trouble. We were right at the entrance to the bay and mountains of white froth tens of feet high were crashing and churning all over us. I thought to myself ‘I know what it must feel like to be chucked inside a washing machine.’

I slid under the board and dragged the old bloke on top and started kicking and backstroking with all my might as I towed him towards his son who had seen what was unfolding and had made his way out on the broken promontory of the Southern shelf.

‘Kick ya old bugger, kick!’ were the only other words I ever said to him. And they were yelled angrily above the din of the waves.

Suddenly I was underwater – for a long time. When I surfaced from the huge wave that had peaked right on top of both us, I was some distance from the old boy. He was still on my board and paddling towards his son. I was now much closer to the northern cliff.

He got there too. He cast the board aside as they climbed up onto the rocks and started picking their way back to shore. I was told later they had a conversation.

‘And my wedding ring.’

That’s when the really big wave hit and they were both washed into the maelstrom.

The young bloke climbed back out, we didn’t see his father again for fifteen minutes that seemed like hours.

Eventually he washed back in far enough for a few of the surfer dudes to wade out and get him.

That’s when Janet did the really heroic stuff. She used her nursing skills to apply faultless CPR for at least half an hour as the distraught son yelled ‘Come on Dad’, and exhorted her to ‘Please don’t stop!’ even though the poor old boy was well beyond anyone’s help.

When the lifeguard did finally arrive – there was nothing further anyone could do.

They had tried coming by surf rescue ‘rubber duckie’ but they couldn’t land it in the conditions, so had turned back and been forced to drive up the beach from Terrigal.

Talk about ‘when your number is up’ – I figure I saved him, and it still wasn’t enough.

So there I am, at the base of a fourteen-foot swell, with a vertical wall of rock about the same height, right in front me - and I’ve just given my boogie board away.

Jan tells me she tried to get out and help me, but couldn’t – it was just too big. She also thought of our two kids - who were just being so well behaved on the beach – as orphans.

She had lost sight of me by this time too. I can only imagine how she felt when the boogie board washed all the way back to shore on its own.

It’s amazing the clarity of thought that came to me: I had it sussed.

I knew it was a tight spot, but felt no fear. Perhaps I was too busy surviving.

‘I’ll wait till the next wave breaks and climb the wall in it. Just a matter of timing’, I was telling myself as I swam over close to the base.

In that moment when the sea drew back as the wave prepared to crash, the roots of the kelp and the sea anemones were exposed. I thought, ‘Ha! I’m probably the only one who’ll ever seen that, this close.’

I planted one foot after the other and almost ran vertically up the face, like abseiling in reverse, floating in the wall of the wave till…Smash! I came down in the breaker well onto the rock shelf, landed flat, dug in fingers, toes and nose and literally hung on for life.

I was right on the edge there for a few hairy seconds, in danger of getting sucked back into the wash, but moments later the sea receded and I was ‘high and dry’.

I stood up as cool as I could manage, dusted myself off, straightened the boardies, satisfied myself I was bleeding enough to impress my Matthew (seawater is good for that) and headed back to the family like I was right on top of things. (More like a Siamese cat who’s just escaped from a soapy bathtub.)

I was pretty much an observer of the events that followed. Janet’s heroics, the son’s anguish, the lifeguards.

I was somewhere else.

We went down to the police station later that night and gave statements. The police said I had showed courage. I still ask myself what would have happened if I had taken him ‘out the back’ beyond the breakers. We might have been picked up by the surfboat, or I guess we might not have ever been seen again. I’ll never know.

Turns out that wasn’t the last chapter either. We went to the old bloke's funeral. After what was a strange Christmas, it sort of gave the incident closure for us, but that still wasn’t the end of the story.

Months later, early in August I received a letter from the Governor of NSW.

I was to present myself and family at Government House to receive the Royal Humane Society’s Bronze Medal for Bravery.

Seems that the Son and the Police had notified the Society of my act.

Lead story in the Newcastle papers, interviewed on the Radio, featured on the evening news, luncheon with my parents, wife and kids at Government house, met the Governor, the Police Chief, the Fire Chief and all wanted to know me and slap my back and I had the day of my life.

My only regret is that poor old man wasn’t there to see it. It would have been better if that second wave was fifteen seconds later.

Now if you visit David Cohen Design you’ll see it hangs on the wall in my office.

I wear it too. It’s been to the Motorcycle Industry Awards and 'The Hippies’ wedding. Anything formal, it's just the coolest thing.

And if anybody ever says ‘Well yeah, what do you want, a medal?’... 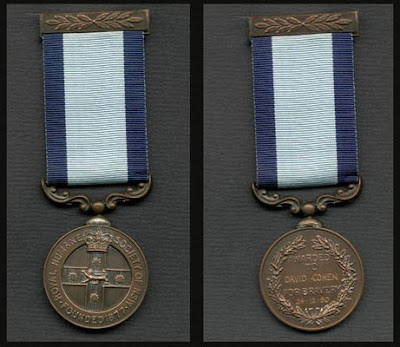