Why was I enthusiastic enough about a helmet to sign on to the Forcite Ambassador programme?

Well, there are a number of reasons.

It really all started 42 years ago, in 1980, when I hollowed out the foam over the ears of an open face helmet so I could fit the clunky headphones of my brand new, original, Sony FM Walkman inside.

Yeah - not the smartest thing I’ve ever done – nor is it the dumbest, but back then it represented the first real opportunity to put stereo music in a helmet … and … it didn't work very well at all.

I basically had to be right in the city centre for the FM radio signal to be strong enough.

But I persisted because I've *always* craved music on a ride. And I understand that’s not for everyone, but to this day rocking a playlist on a ride is part of my joy.

When portable tape players became available that was even better – no static – and I could choose my own programming on cassette.

From there I’ve been right on top of every advance in the Tech: From portable CD readers to a miriad of different players - and on to the Mp3 revolution, ear buds, Bluetooth and an ensuing range of devices, iPods, phones and even lately, my watch.

42 years of it experimenting and improving – but now I’m thinking and hoping that this maybe the ultimate. This helmet has a dedicated Harmon-Kardon sound system built in. And No need to scoop out the foam.

But that’s not the only feature that sings to me. 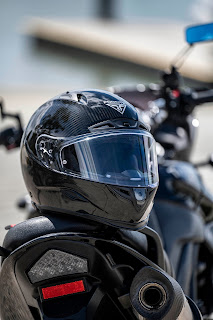 I started regularly contributing to Motorcycle Magazines in 2002 - and have been testing motorcycles and allied products in print for over 20 years now.

As an adjunct to that print media work, I also started producing bike test videos, right back when You Tube was in its infancy.

I spent a lot of time fabricating movie camera mounts for motorcycles. With better success that that first Walkman, but they were still very primitive.

My first attempts used tape Camcorders, the movies were published at 360x240 pixels, and they shook like crazy.

But as that tech evolved, I followed that as well – to digital cameras and then on to a succession of action cameras – and have always sought new ways of mounting or wearing the devices.

Now *this* Helmet has a 1080 60p camera built-in that is operated remotely.

It’s even located close to what I consider the best aspect or position for recording on board.

The other issue I’ve long wrestled with for capturing video on a motorcycle is sound quality.

Microphones don’t like wind and conquering the bluster on a bike has remained an ongoing challenge.

This helmet has 2 microphones inside, designed to cut wind noise and it has a liner specified to do the same. Jiminy! I can’t wait to get amongst it on a test bike.

And then there’s Navigation.

When relocating to a new city or touring on a bike, I’ve tried a number of different navigation devices to find a solution there too.

I’ve put devices like Garmins on my handlebars and I currently have a Beeline interface that works quite well, but this helmet has a Heads-Up Display that works in concert with its app to give guidance, warnings and other alerts.

There’s plenty of other features that tick my boxes too … its high safety rating, Carbon Fibre style, the ability to take phone calls on the go – all of its features are all laid out on the Forcite web site – but enough with my story

I’m now off to suss out how it all works, figure out where I’m going to store the helmet to charge it, read the instruction manual thoroughly, then go for a ride and start video capability testing.

In the meantime, if you’re interested in purchasing a Forcite Helmet, use the Code ‘DAVE5’ at checkout and you’ll get a 5% discount on the purchase price as well as a Free Pinlock visor.